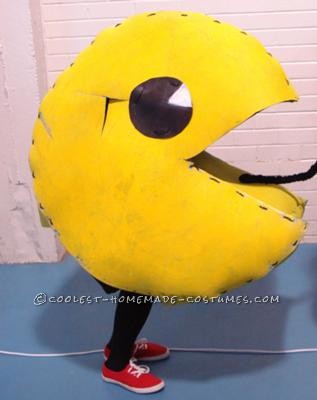 After visiting a pop culture convention where some people dressed up as their favourite character, I decided to make a PAC man costume for the following year.

I made him out of foam (the same material pilates/yoga mats use), paint and cable ties to attach the foam parts together (I only had black at the time, hence the stich effect around the edges). black tights (originally had yellow but misplaced them on the day) and red shoes.

At the foam shop, they offered black foam but I didn’t think paint would stand out so I bought blue foam, painted it white, then yellow with acrylic paint to avoid the yellow looking green. If you want to wear the costume a multiple amount of times, I would suggest using fabric paint so it wont crack after wear. Since I was only wearing the costume once, acrylic paint was ok.

I cut out 2 circles from 1 large sheet of foam and bought 2 Pilates mats to attach in-between. It was last minute I decided to make an open mouth so there is no cover where the opening is. It was a good thing I did have an open mouth as a lot of people got photos with me eating them. Another great thing about the foam is I could make the mouth open and close due to the flexibility of the material.

I didn’t have time to make something to hang the costume on my shoulders so it mainly rested on my head and also held it up holding a couple of cable ties inside which I hid behind the eyes. I cut a couple of slits on the sides for my arms to come out too.

All together, it cost about $100 (foam was the most expensive part of the costume)

As a TV crew was at the event, I managed to have my costume shown on the Australian TV show: ‘Hey Hey It’s Saturday.