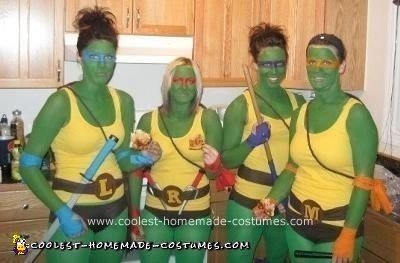 This Ninja Turtle DIY group Halloween costume idea was so much fun for Halloween this year.

#1: We used disposable foil turkey roasting pans which we bought at Walmart for under $3.00 each. We shaped the pans with our hands trying to round out the bottom of the pans, so they were not as flat.

#2: To make the pans easier to paint and to give them more of a shell shape, we used paper mache. It was messy, but honestly made the shells look awesome! Our homemade modge podge recipe –> 1 cup flour to 2 cups water coat thin strips of newspaper and cover each pan with 2-3 layers of paper. This took a good day or two to dry so make sure you do this part of the costume first.

#3: Next we used cheap green paint..also from Walmart and painted the shells completely. After the green had dried we used brown paint and painted random lines to give the effect of a “shell pattern”.

#4: After the shells had been painted and were dried, we cut two holes in each shell, 1 in the top corner and another in the opposite bottom corner, a little slit with a knife will work just fine too.

#5: For the shell strap we used 2 strips of brown fabric, which we roped together and tied on either side of the holes.

#1: We used cereal boxes and cut out circles that we had traced with a cup.

#2: We painted them brown and once they were dry we painted a yellow block letter on each of them to correspond with each Turtles’ name.

#3: We used an exacto knife to cut two 1-inch slots down both sides of the circles (make sure you don’t cut too close to the edges or the next step with wreck it).

#4: Next we fed a brown fabric strip through both slots and then tied them around our waists.

The rest of the costume was pretty cheap and easy as well. We bought fabric from Walmart and cut strips for our wrists, elbows, and knees.

We bought our tank tops and briefs from Walmart as well. The shirts were $5.00 each and the briefs were $3.99 each.

Nylons were from Zellers for $6.00 each

We used nontoxic children’s finger paint from Walmart as body paint. We covered our face, necks, and arms with green and then painted our corresponding turtle color across our eyes. 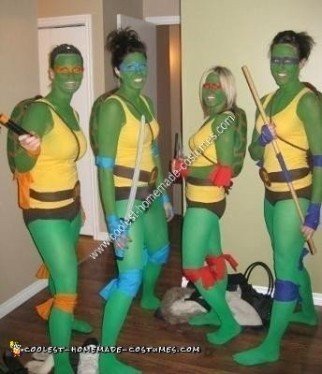 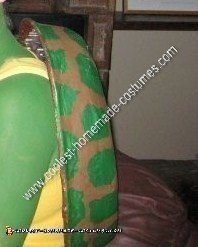