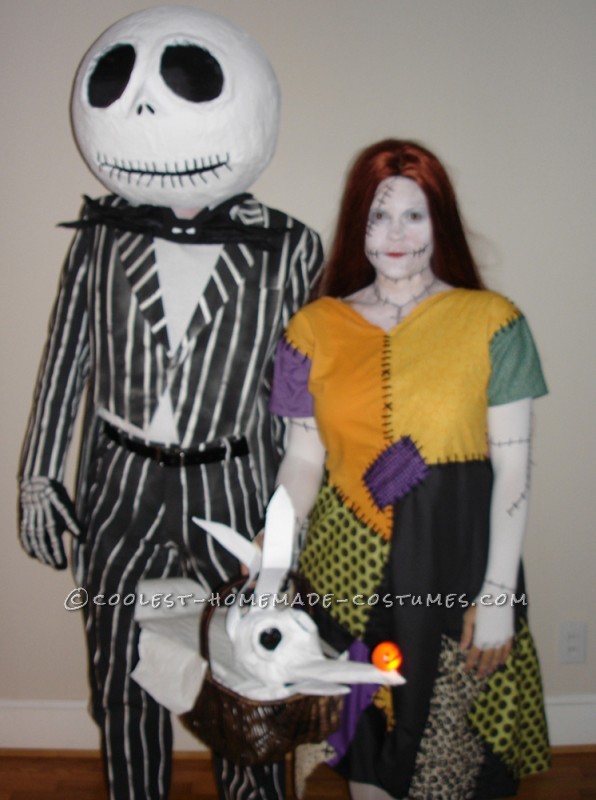 Halloween is our favorite holiday and we enjoy the creative process as much as the party and night itself.  We are not the type of people that start our costume planning the NIGHT of Halloween.  We have ideas years in advance and plan for months each year to have our costumes ready.

Our Nightmare Before Christmas costumes creation process began early that year. We started buying items about a two months before Halloween. To start Jack’s costume, we found a coat on eBay.  The cheapest one we could find was white, so that determined our path for creating the stripes.  Since we had a white coat, we bought plain white painters pants.  From there we taped the coat and pants with blue painter’s tape.  The tape was too wide, so we used a razor blade to cut it in half before pulling it off the roll.  We taped up the pants and coat and used black spray paint to create the stripes.  It turned out pretty good, but was a bit crunchy.  We even added some special touches inside the coat for our own amusement.

For Jack’s Head, we’d seen many variations on the internet, but wanted to create our own.  We got a beach ball and coated it with many layers of papier-mâché.  The papier-mâché process took many days, but was worth it.  After we finished the papier-mâché we popped the beach ball and pulled out. We then built up a nose with cardboard and cut the mouth and eyes openings.  We papier mâchéd more around these features and painted the whole head white.  We then put thin black see through material on the inside so folks couldn’t see my husband’s eyes.  The head sat too low on his head so we glued a big car wash sponge to the inside top to hold it in the proper position.

For Zero, we made his head out of balled up newspaper and left over cardboard then added some papier-mâché for the details.  We wired a doll house light to a nine volt battery and stuck the light inside an orange ball.  The ball was actually a novelty small basketball pencil sharpener for kids.  I used nail polish remover to take the basketball paint off and hand painted a pumpkin pattern.  We’d planned to mount his head on a long wire and have him float beside Jack but the head was too heavy.  Since the wire plan didn’t work we decided to put him in a basket similar to the one Sally carried in the movie.  We cut out white fabric in the shape we wanted and soaked it in liquid starch solution to help it form and hold the shape.  We were trying to give it the look of flying.  This was probably the least successful portion of our costumes.

For Sally, I made the dress from scrap material I purchased from the store.  This was almost as hard as Jack’s head creation.  I am not the best seamstress, but managed to pull off a relatively similar look to the character.  For her legs and arms I used white tights and cut finger holes.  From there I drew the stitches on the tights.   I ordered the wig online and think the color was great.  The makeup was another less than perfect attempt.  Since these costumes in 2006, we’ve purposely picked costumes without face paint due to the difficulty we encounter with Jack and Sally.  I’m sure there must be good face paint out there but the cheap stuff we used was hot, sticky, and we couldn’t touch our face ALL night.

The costumes were a big success our annual Halloween party.  Jack’s head was the biggest success of the evening.  Everyone wanted to try it on.  We also had the movie playing on the TV and songs from the soundtrack mixed into our music of the evening.   In the years since we wore these costumes, Jack & Sally “attend” our Halloween parties.  We stuff Jack’s suit with towels and sit him in a chair.  Sally’s wig & dress hang on a mannequin.  They seem to enjoy observing our parties from their corner of the house, and our work can be appreciate beyond the one year we wore them.

Thanks to Tim Burton and company for the creative minds behind the movie. 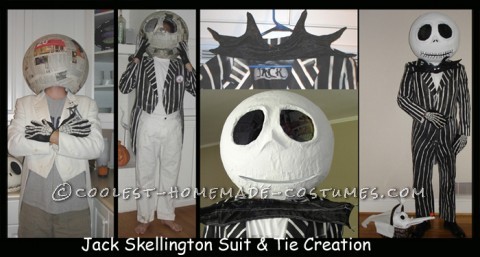