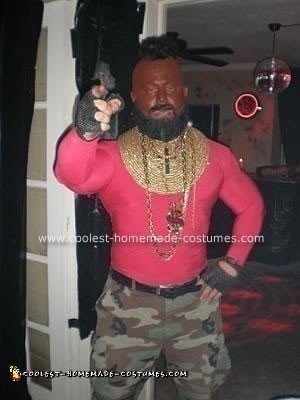 I’ve always been a fan of the T, and he had the best damn cereal known to man. So what better way to pay homage to the master of disaster, the man, the myth, the legend, than to live the dream for a night as Senor T.

So, the making of Mr.T Halloween costume! Here’s how I did it.

The Neckpiece: I used about 15 yards of gold rope glued to a poster board with epoxy (epoxy was the only thing that would work), and then topped it off with some loose gold colored chains from Halloween Express and Lowe’s. I also threw on some cheap, fake gold earrings from Wal-Mart.

The Hair: a bald cap with a Mohawk wig glued to it (again, used Epoxy).

The Face: a bunch of brown make-up and spirit glued the beard and mustache on.

The Threads: a cheap red under armor knock off from Wal-Mart, and cammo pants from the local Army Surplus store.

Needless to say, it was a hit and everyone dug it.