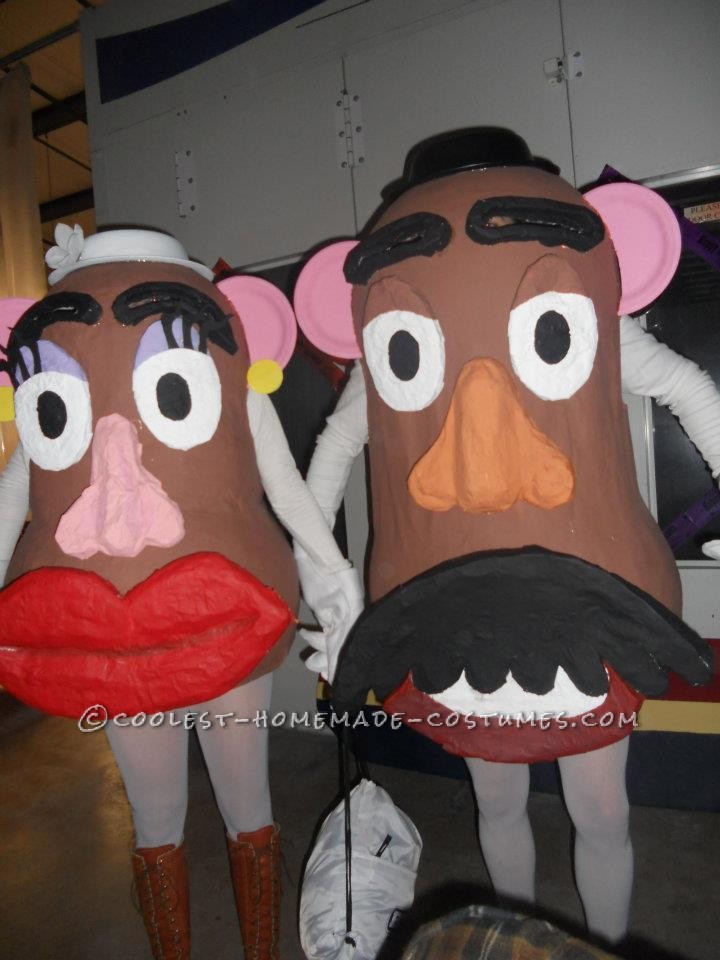 So to start the Mr. and Mrs Potato Head Couple Costume I went to  the store and got 2 of the gym work out balls. I then taped the smaller ball on top of the larger ball and covered both with garbage bags. I then made a paper mache mix and got some newspapers. I then tore long pieces of newspaper about 18″ in length and 1″ wide. I ran the long pieces up and down to connect the two balls.

Next I covered the rest of the balls in paper mache. I used a large bowl to set the balls on and used it as a guide as to how far to put the paper mache so that my legs could stick out the bottom. I would let a layer dry and then do another layer of paper mache so there was a total of 4 layers. After all of the paper macke was dry I deflated the exercise balls and took them out of the costume. I also removed the plastic bags so that the inside of the costume could dry.

After all was dry I painted the entire costume brown. To create the hats I took a flat bowl and painted it and then glued it to the top of the costume. To create the eyes, nose, and mouth I layed down wax paper and used spray foam to spray out the shapes. After the spray foam was all dried I covered it with paper mache and painted them the appropriate colors. Next I used a large bread knife to cut out the arm holes and to make the bottom hole larger also. To be able to see out of the costume I cut holes where the eye brows would be and I made spray foam eye brows. I then cut out the middle of each eye brow. Then put paper mache on them and painted them black.

To make the ears I used Styrofoam plates and painted them. For the hands I sowed felt gloves. We then wore white tights on our legs.