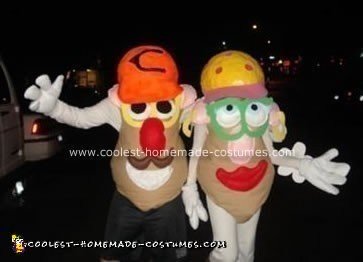 After searching the web for costume ideas, we decided to be Mr. and Mrs. Potato head… We started by using a pattern for a bumble bee costume. We altered the pattern slightly to remove the bee stinger and head.

After sewing the costume together we stuffed them to make them big and round. We made the ears, noses, eyes, and mouths out of felt. We used two pieces of felt for each piece sewing them together so we could stuff them and make them 3-D.

All of the pieces were attached to the costume with Velcro so we could move them around like a real Mr. Potato head. The glasses and earrings were made out of foam board. All the pieces we drew free hand after looking at a picture of them online.

We made the hats out of paper mache (using a large beach ball for the shape). We attached an actual hat to the inside of our paper mached hats so that they would sit nicely on our heads. We spray painted the hats and then for Mrs. Potato Head cut out circles, where we put a see through fabric so we could look out through the hat.

For Mr. Patato Head we used the Chicago bears logo on the hat (as my boyfriend is a big fan) and did the same using a see through fabric so he could see out of the hat. We finished the costume off with a white shirt and some big white hands that we purchased at the costume store.