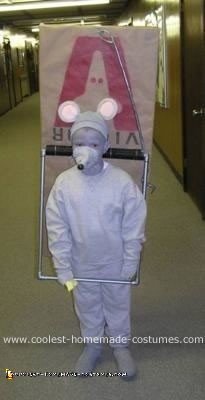 There have been many variations of this costume, but none were what we wanted for our costume. We decided to take matters into our own hands. We bought a sheet of pink foam insulation and cut it into two rectangles that were the right size that we needed.

We covered the two pieces of insulation in brown mailing paper that you can get for the price of a dollar at most places. We then glued the two pieces together to create a clean edge all the way around. We made a VICTOR mouse trap logo stencil out of poster board and spray-painted it directly onto the brown paper in red.

We took PVC pipe and formed a square, covered it in silver tape and at one end wrapped it all the way across with leftover Television cables. We then glued that in the center of the rectangle. We attached two old backpack straps to the insulation so that he could carry the trap as though it were a backpack. We cut holes in the sweatshirt to hide the straps.

The mouse suite itself is a cheap gray jogging suite. The ears are pieces of felt cut out and glued to a fitted cap. The snout is another piece of felt, cut and glued to form a mouse nose. Small pieces of fishing twine were fed through the felt to make whiskers. A little gray face paint here and there and a cut up sponge to resemble cheese were the finishing touches.

We received many complements while walking around town that night. He was the kid with the most popular costume in his class.

5 thoughts on “Coolest Mouse Caught in a Trap Costume”