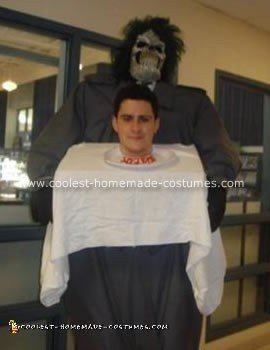 I am a grade 12 student and my school always gets dressed and we have costume contests. I was thinking of what to be for Halloween as I wanted to do something that I had not seen at my school in all the years that I have been there.

I made my costume out of cardboard, duck tape and a glue gun. I found an old mask I had from when I was younger and used a trench coat that I found in the closet.

I began making my costume on Wednesday night which was two days before Halloween and I finished the night before. It took me almost 4-5 hours to find everything and put it all together. I had to build a spine and back for the fake monster that sat on my back and I mounted the cardboard body on my shoulders like a backpack. I then put the trench coat on the fake body and filled the arms and attached a cardboard table that I made around my neck. My Head was showing with some fake blood on a plate and my legs acted as the legs to the monster with the fake body.

A lot of people thought my costume was awesome and creative!