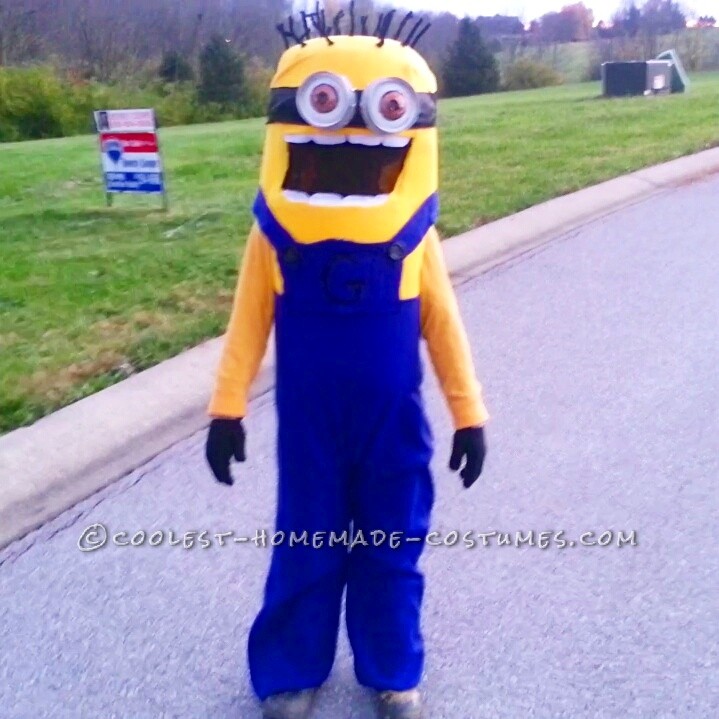 My son wanted to be a minion, but didn’t like all the pre-made costumes we found. I was inspired by a huge candy bowl I found in a dollar store. I turned the bowl upside down, cut a pool noodle to fit inside, and that became the top of the minion. Next I duct taped a piece of poster board around the front and while it was on his head measured where the arm holes and mouth hole should go. I covered the entire top in yellow fleece fabric and added sheer black nylon over the mouth hole so he could see out but no one else could see in.

The eyes are a Styrofoam ball cut in half with wide mouth canning jars lids for the glasses rim. I then made him a pair of overalls and hot glued the top to the costume. I cut the back open and added velcro closures so he could climb in and out through the back. Black pipe cleaners for hair and he was ready to go. This costume was a big hit with everyone who saw him. Little kids ran up screaming “MINION” and hugged him. Adults wanted pictures with him. At first he was shy, but soon began loving the attention and was dancing down the sidewalks and waving to everyone.

Check him out in action, here!