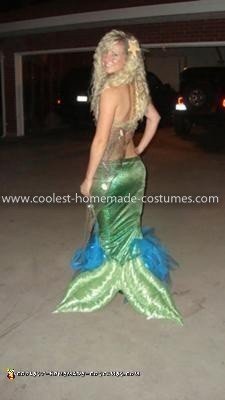 I decided to be a mermaid this year, I love making my costumes. This one took me a lot longer than any others I have made but it turned out exactly how I imagined. Here is step by step the best I can tell you how I made it. A lot was trial and error or just hope that it worked :)

I started with the skirt – shimmery dark fishy green and a lime shimmery green for the tail. I made sure it was stretchy so it would fit tight but I could still move in it. I had my mom pin the dark green fabric tight on me from hip to right past my knees to give it the mermaid look then had it flair out as wide as I could with the amount of fabric I had. I sewed the skirt then and sewed elastic in the top.

Next I made my fin. I drew a pattern on newspaper then laid it on my fabric and cut it out. I sewed around it inside out then turned it right side and sewed strips down it to give it dimension and fin effect. Then I stuffed it and sewed it closed in a V.

Since I was having the fin be a train I was afraid that people would stomp on it at the party and rip it off so I triple stitched a strip of the dark green fabric on at the V then Quadruple stitched that onto my skirt where I wanted it to be.

Next I got dark blue shimmery fabric for the under part of the water. I cut it into two big strips, then sewed down the middle of each on onto the front and sides of my skirt till they met my tail, this made it look like flowy water layers. I got blue sparkly tulle. I just hand stitched it all over the blue layers to make it like water.

For the top I used a bathing suit top that I had. I picked one that was different shades of green so it would blend and it covered well (not just a little triangle tops). I covered it completely with netting that I got at a craft store, I hand stitched it on to stay.

Then it was time for my big booby shells (sea shells at a craft store). I found adhesive velcro and covered the inside of the shells with that then sewed the other side of the velcro to my bathing suit. I wore the bathing suit when I put the shells on, I also put some hot glue just to make sure it worked. Then I stitched on the netting I wanted draping down me. I hot glued sea shells randomly on it.

For my hair clip I bought clips and just hot glued netting and sea shells on it. I decided to crimp my hair and I put my extensions in just to give me tons of mermaid hair and I did lots of blue and green eyeshadow.

I loved my Mermaid costume and had tons of fun coming up with it. Hope this helps you come up with ideas. 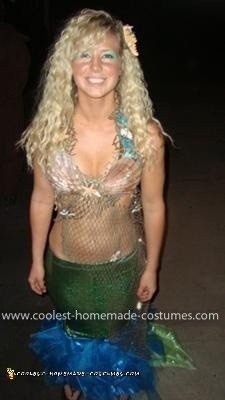 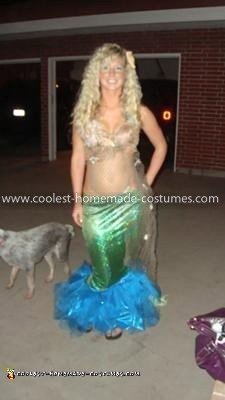 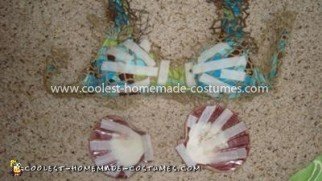 Mermaid Costume Made from Curtains