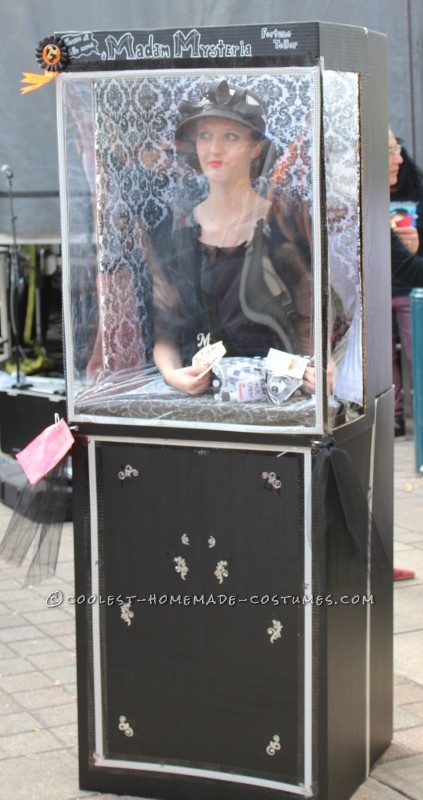 Our sixteen year old daughter is a magician and escape artist by profession. She loves anything magical or mystical, so naturally she wanted to dress up as something that showed her personality. She decided to be a fortune teller, but we took it a step further and made her into an old fashioned fortune telling booth.

We used four black tri-fold boards turned wrong side out so the black would be facing out. We hot glued the two bottom boards together and then worked on the top two boards. We covered the top back board with white and black table cloth-like material to decorate it. We then took the front top board and cut three windows and taped lightweight plexiglass on the inside of the boards to make it more realistic and give additional strength. The two top pieces were hot glued together and then we drilled hole in the top of the bottom half and bottom of the top half and attached them with thin rope. We had to lift the box over her head so she could get into the box. She then placed a foam board that we had cut to fit and covered in black cloth around her waist as a platform for her hands.

She held playing cards and dressed in a black outfit with black tulle around her shoulders to add a mysterious look. We embellished the outside of the box with stickers and ribbon to decorate it. The costume was hard to walk in, but when she wanted to move to somewhere else, we would have to help hold the outside of the box while she was holding it up on the inside and walking. A few times she moved it all by herself and it was funny watching her walk in fast baby steps. While in costume, she acted very stiff and animated like the old fashioned machines would. We had so many compliments on her costume about creativity and imagination.  She even scared a few people who thought she was an actual mannequin.

People would peck on her glass and ask her questions, but she couldn’t hear them very well because there were no holes near her ears. It was funny watching her try to communicate with them. Many people had their picture taken with her. We took her to a local festival and entered her into the costume contest and she won second place for her category. The funniest thing that happened while she was in costume and waiting for the costume contest was when she had just finished saying to her cousin that she hoped a bee didn’t fly in, when almost before she finished saying it, a wasp flew in and she started screaming and swatting at it and beating on the glass and shaking the box trying to get it out. Thankfully, she didn’t get stung. This was a fun costume to build and got lots of attention and many great reactions. The cost for this costume was under $15.00. 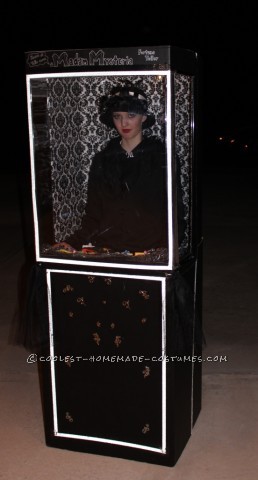 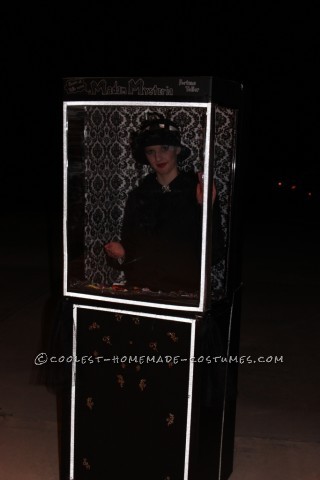