This year my boyfriend decided he wanted to make his Halloween costume. He decided to dress up in a Homemade Mad Hatter Costume which seems like something fun and original to be.

First we started by looking through his closet to see which items we could use for the pants we just cut a pair of brown pants a little below his knees. He also had a button up light pink shirt which he could wear under a vest. For the vest he had many choices but whe chose the one that looked the most similar to the character.

We purchased a funky looking scarf at target for a Dollar to use for the bow. The shoes we found from a thrift store for only two dollars. He was lucky to borrow a coat from his cousin that was used years ago for a different costume. We had to buy a few more things like the thread spools to make the bandolier, ballon string to connect them, white face paint from Walmart, an orange redish wig and a top hat. We cut the wig and teased it to make it look crazy. For the face I used eyeshadows and lipsticks I already own. We made the eyebrows using hair from the wig and stuck them with eyelash glue which worked great. For the gap on his teeth we used black gel liner which stayed the whole night.

This was a very fun costume to make and a big hit at the party we went to. Happy Halloween!! 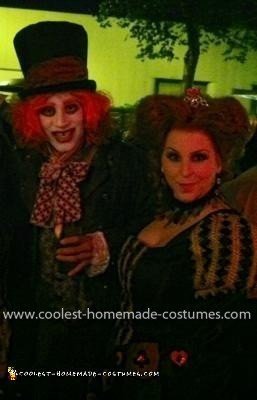 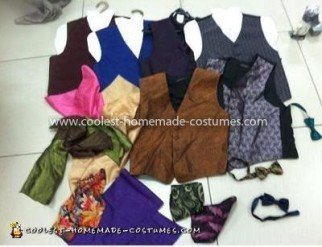 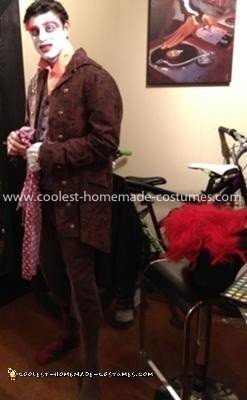 2 thoughts on “Coolest Mad as a Hatter Costume”