My nine year old daughter wanted a Homemade Lumpy Space Princess Costume (LSP) from Adventure Time, and this was not a costume that we could purchase. We found a basic purple shirt and leggings at Target to use as the base of the costume – cost was around $10. Next we went to the fabric store, where we found violet Craft Felt on sale for $2.99/yard. We bought one and a half yards, and also bought a small piece of yellow felt for the star for $1.09. After purchasing purple and yellow thread, our total was still under $10.

To cut out the shape for LSP, I folded the violet felt in half and asked my daughter to lay down on it so I could determine the size we would need to cut. While looking at a picture of LSP, I drew the simple lumpy shape onto the violet felt around my daughter’s body with a washable marker, starting with the lump at her neck. I decided which half looked better (left or right) and then folded the fabric in half vertically to make the costume symmetrical. I cut the lumpy shape from the fabric a little larger than the lines I had drawn for a seam allowance, then washed the fabric to get rid of the washable marker lines. After measuring a 12 inch opening along the top of the fabric (for her head to go through), I pinned the sides of the fabric together with right sides together, then stitched the whole way down each side to the bottom of the largest lump. The finished product was about 36 inches wide at the largest part and 36 inches long.

I made the arm holes by cutting a straight three inch line in the front side of the costume from her armpit to the side seam. I followed online instructions to make a fleece hat and stitched on the star to the front of the hat after using a stencil to cut it from the yellow felt. The total sewing time for the costume and hat was under one hour. We covered an empty oatmeal container with a paper bag to make LSP’s can of beans to complete the costume. 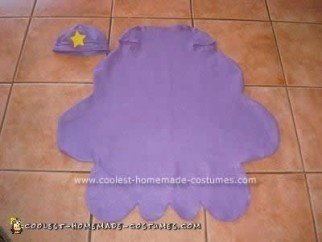