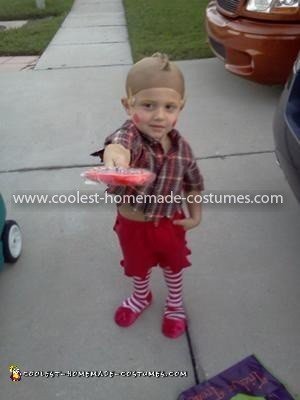 Every year I try to beat the prior years’ original costume! This year I decided on one of the munchkins for my 4 year old son, who not better then the famous “Lollipop Guild”! So easy, inexpensive and to see people laughing just made my day!

Red jogging pants were from Walmart for $3.00 cut to knees with jig jags, I added 2 slits to the side to have the effect of the pockets, since they danced with their hands in their pocket!

Out of my sons closet was a red plaid long sleeve shirt. I put it on him and again cut jig jags at the bottom making the shirt short like they wear and jig jag cut both sleeves at the elbows.

Went to Spirit Halloween and bought the red women’s knee highs for $5.99 and a blonde mustached $5.00. I cut the mustache into 4 pieces and adhered it to my sons’ side of his face, making his curly side burns.

I had one of my old nylons and cut the end of it off to put on the top of his head (this was a last minute idea). At first I bought some spike gel to put in his hair and tried to use a curling iron to make the 3 curls (his hair was too short, he thought I was going to burn him and it just was taking up too much time), that’s when I went with plan B – getting the nylon over his head.

Once I put it on, I gently made 3 holes at the top, pulled his hair through each hole, still used the spike gel, put his hair around my finger and held it for about 10 seconds and they stayed in place.

I bought a makeup crayon kit for $2.99. The yellow crayon I used and went over his eyebrows with it and the red makeup crayon to make the little red cheeks.

Of course he had to be topped of with a lollipop that I also got at the Dollar Store for $1.00

I was unsure of how many people would know who he was, but was relieved at the end of the day with the laughs and giggles from all the Wizard of Oz fans! Many older people knew exactly what he was! 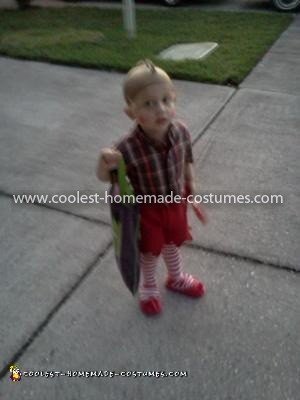