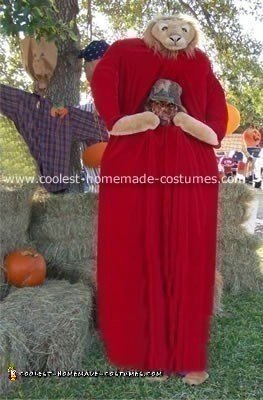 This Safari Hunter had a Lion who actually Hunted her and now he carry’s his prize around to show everyone! Creepy!

THE STORY: Okay, so it was my first time to go out Safari hunting for a lion in Africa. I didn’t have much luck my first few days. I saw lions but no clear shots. One of the lions I saw was huge, he must have been the king Lion because he walked on his hind legs and wore a big red cape.

One night we all sat around the fire for a while before I retired to the tent to get some rest, I couldn’t stop thinking about the HUGE lion I had seen, and didn’t dare tell anyone about it, because I wanted to be the one to get the biggest, badest lion out there. That night I was dreaming about seeing the King Lion again and all of a sudden I awake to a loud growling in my face… OMG it’s the King!! He had me pinned down with his front paws, and He was not going to give up without a fight. He took the time to hunt me tonight and won!

I lost the this fight and now he carry’s my head around to show everyone his prize. I don’t know if he ate the rest of my body or left me there for the others to find because I am dead now and couldn’t possibly know that… LOL

The Lion Hunter Halloween costume: This one got so many looks and people stopping me to take photos of. Everyone loved it and wanted to know how I made it and they all knew I spent a lot of time making it. I started working on it a week before Halloween.

I was going to do the whole alien holding the baby costume thing but decided on something different and unique, and just didn’t know what or how I was going to do it. The idea of this lion came into my head but all I had was a lion head hanging on my daughters wall that is stuffed but looks like a mount. I did not see that working too good so I started looking for maybe a stuffed animal deer mount when low and behold I pulled up at a little old ladies garage sale and almost drove away because I didn’t think this little ole lady would have anything for my liking, and guess what I spotted laying on a table saying TAKE ME! Yep a lion rug!

I walked over and looked at it and she had it marked for $5.00 and I asked if she would take $3.00 and she gladly accepted so I bought some $3.00 homemade canned pickles she made too.

I went home happy with my find that day and began thinking of how this was going to work out and started cutting, sewing, and thinking and it all came together rather well too. The rug looks kind of like this one below.

I cut the head from the body of the rug, then cut all four legs and the tail. I took an old lamp shade that I had and started sewing the head to the top of the lamp shade. Once the head was sewn onto the lamp shade, I bent the bottom part of the shade to fit over my shoulders. Then cut a hole big enough in the shade for my head to fit through.

I bought a red robe at a resale shop for $3.00 and took the belt off and did sew the front of it up leaving an opening around the area where my head was going to go through the front.

Stitched the hands right near the hole opening where my head was going to stick through to make it look like the lions hands were holding my head.

When you lift the head/shoulders above your head you drape the robe over you and set the lamp shade on your head. then poke your head through the hole, your hands are inside the outfit and I just held the lamp shade if I bent over so it wouldn’t topple off and when standing straight up it sat fine on my shoulders.

It was fun seeing peoples reactions and the many people who would stop and stare at the costume to just to figure out how it works. I am guessing they probably thought someone was on my shoulders with the lions head on. It was funny and won the Costume contest!

Optional- Camo hat and make up 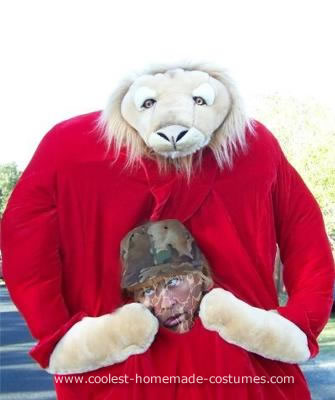 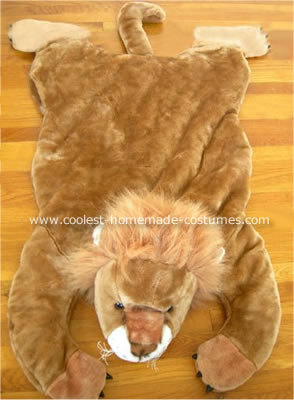