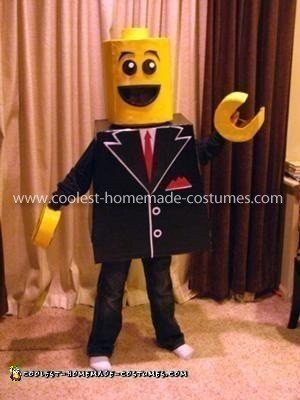 After seeing some other Lego-Man costumes on your website, my son wanted a Homemade Lego Man Halloween Costume for Halloween. He was very happy with the way it came out, and got a ton of compliments from his classmates and friends. He also won a trophy at our town’s Halloween Costume Party.

Making the costume was not hard, just required a little patience and time. The body was made of cardboard, shaped to fit over his body. Like the real Legomen, the top (by his shoulders) was thinner than the bottom. We spray-painted the body in black, and affixed thin colored foam (white/red) sheets cut to look like a suit, and hot glued them to the body. We bought the foam at a local art supply store.

The head was also cardboard. I found a cardboard cylinder, and cut it to the size we wanted. A small round box was hot glued to the top. I then cut out the mouth where his eyes were, so he could see out of the head. We tried spray painted ing head yellow, but it didn’t really cover very well, so we went with Plan B, which was to cover the head in thin yellow colored foam, glued into place. That worked much better.

With black and white foam we made eyes and eyebrows, and glued them into place. We also spray painted a piece of screen, and glued that into place under the mouth hole. This way he could see out of the mouth, but when you looked at the costume you really didn’t see his face. The head attached to the body with Velcro.

The claw hands were made of cardboard, and covered with the yellow foam to match the head. He wore black pants, to match the body. We didn’t make cardboard legs because we wanted him to be able to walk up and down steps with ease.

He was very proud of his costume, and it was a big hit. 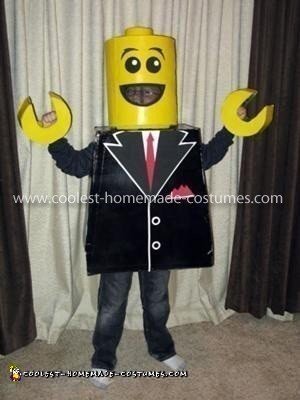