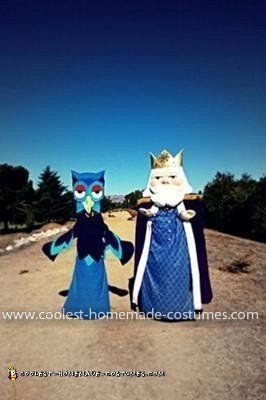 First, I just want to say how much I love this blog! I’m always so inspired by how creative people can be! I’ve always gone “all out” on Halloween, but the last couple of years have been especially crazy for me. Last year I made this Angry Birds costumes that everyone loved, so this year I knew I would have to work really hard to come up with something just as good. Since Angry Birds are so current, we decided that we would go “old school” and make King Friday and X the Owl from Mr. Rogers Neighborhood of Make Believe! I spent almost 2 months working on these. There was a LOT of trial and error, and many times when I wanted to give up, but in the end they turned out better than I could have hoped!

King Friday’s head is made out of paper mache and then hand painted. The crown is made out of cardboard and plastic jewels that I glue-gunned on. My brother-in-law helped me build an internal wood structure that attached to a life jacket (keeping all the weight on my shoulders instead of on my head). I cut, sewed, and stuffed the hands from pieces of felt, and then I stuck sticks into them so I can control them from inside the costume. I bought a ton of various fabric for the body and cape, and finished it off with small details like the pearl buttons and the gold fringe.

For X the Owl, I used a cardboard box for the head and glued on pieces of felt. I sewed and stuffed the beak from felt as well. The body is actually made out of a Snuggie that I got for my birthday a few years ago, and then I glued on additional feathers made out of fleece. The head is held up by the same wood/life jacket contraption as King Friday.

The only bad part about these costumes is that they are so big we can only wear them outside (I think King Friday is about 8 feet tall)! Good thing West Hollywood has a huge Halloween outdoor carnival every year! Hope you like the Homemade King Friday and X the Owl (from Mr. Rogers’) Couple Costume! 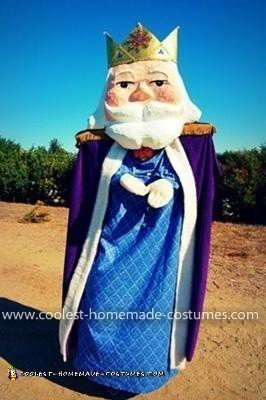 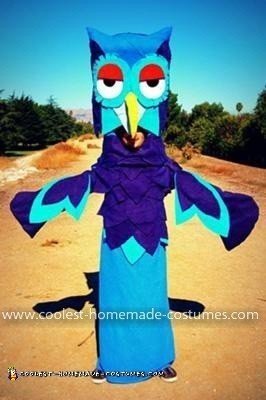 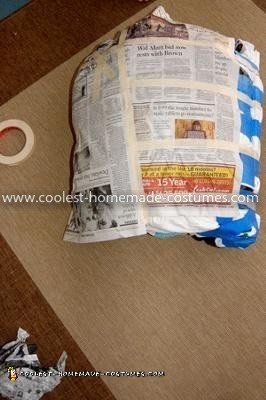