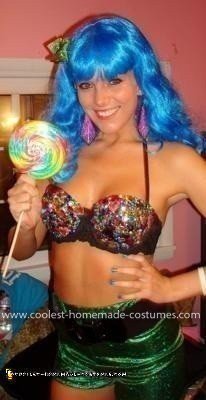 This is my homemade Katy Perry Costume. I was going for the California Girl look, from the beginning of the music video. I just bought a bra at Wal-Mart and bedazzled it with multi-colored gems that consisted of hearts, stars and a variety of different circles. The shorts were just fabric we found at JoAnn and used an old high-waisted short pattern that my mom had. It took probably four or five hours all together, between individually gluing on each gem to the bra, (and the shoes, which somehow didn’t make it into one picture throughout the night) and sewing the shorts together. Other than that, the wig was just found at a costume store, the belt off of a shirt I already had and the Wirly Pop at this very large candy store. Oh and of course there was a lot of body glitter and blue and green make up for the final touch.