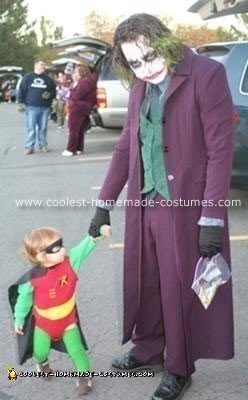 This costume was of course inspired by the movie the Dark Knight, which I saw four times, two of which were in IMAX.

The whole Joker process took two hours to get ready. The entire process itself began in November when I thought the Joker would be the perfect Halloween costume. It was extremely hard to find a long purple coat. On ebay there were long purple coats selling up to $900. And that was just the coat, nothing else. But the amazing part is that people were buying them. I started looking in April and didn’t find one until August. Needless to say my wife was tired of Halloween in April. I went to thrift stores countless times looking in the women’s coat section. I bought four purple suits in the process of finding the one I ended up with. The hard part was first finding a purple coat then finding purple pants to match. Simply finding one at all in a thrift store was a miracle in and of itself. I knew without the long purple coat you couldn’t do justice to the iconic Joker look.

I bought a lot of thrift stuff and in the end I had enough to sell another full Joker costume which I did. The green vest was very hard to find. I bought a couple of them before I found the one I ended up using. The shirt came from Hot Topic and is the official shirt from the movie with the exact honey combed pattern. This amazingly enough was the most expensive part to my costume. I looked on ebay several times and it was going for about $70 which is not what I paid for mine.

Purple gloves were really expensive and no where to be found before winter in stores. The only place to find them was on ebay. And I wasn’t about to spend $30 and up for gloves that I could not try on. The official Joker gloves they had in stores were too big in the adult size and too small in the kid’s size. I bought several pairs of cloth gloves but it was either not the right texture or the purple was too bright. I ended up just finding cheap black gloves and cutting off the tips then painting my nails black. It’s not what he did in the movie but I thought it gave the same creepy feel and did not detract from the costume as a whole.

There are about four different types of products in my hair. To prepare for the greasiness I didn’t wash my hair for three days. The night before I wet my hair and then when I woke up it was curly. I put on a paste to hold in the curls. Spiking gel was used to push the hair back to emphasize the receding hairline. Moose was used to make it shine then hairspray to hold it in place. After that I added the light green hairspray. Then I took some of it out with a wet towel in areas to make it more messy and not as bright. Finally I used hairspray again so the green would not leave a huge greasy spot on the back of the purple coat.

I went to great lengths to make the make up just right. I used white Halloween tube make up and black eye shadow with cheap dark red lipstick for the smile. I purchased a prosthetic scar at a costume store which was filled with safety pins that I took out. After that I cut it in half. I applied the scars with spirit gum which burned like an open sore because of my sensitive skin. My face was hot and burned all day, especially when I had to re-apply the scars about every two hours. To blend the scars into my face I used liquid latex. Latex was also used to get the forehead wrinkles. The latex and spirit gum actually left real sores as I took them off, they peeled off layers of skin. It took about a week to heal from the waffle iron face look. But it was worth it.

After applying the makeup I would smear it and wipe parts of it off to make it a little scarier like the interrogation scene in the movie. The final and best touches to the costume were voice and posture. I slouched the whole day and strained my voice to sound like his. I found ways to fit in lines from the movie whenever I could. I liked it when people asked me how I made the scars. I would walk up close to them and say, “Do you want to know how I got these scars? My father was a drinker and a fiend and one day he came home a little crazier than normal…”

It took so much time to get ready I thought I might as well make the most of it. So I went to Wal-mart to do my shopping at midnight. I startled the girl stocking the yogurt. A few people took my picture. It was fun to see people smile. There were two guys who took my picture came up and told me that they started driving away but they had to come back to take my picture. It was such a fun character to play since Heath Ledger did such an amazing performance. I stayed in character all day
long. It was the coolest Halloween ever. 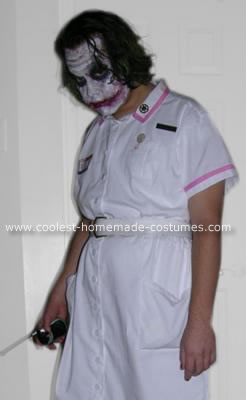 Here’s another take on the Joker costume.

It was extremely hard to find a large nurse’s uniform since nurses actually don’t wear uniforms anymore, and most on ebay were small sizes. I ended up finding a dickies nurse uniform on amazon of all places. When it arrived I had my wonderful neighbor tailor the uniform to
fit me better. Then I bought some pink strips of fabric and had her sew it onto the collar and to the sleeves. It was very hard to get the costume accurate because there weren’t really any pictures of it anywhere on the internet
except for small clips on you tube.

I borrowed a silver name tag and a round pin for the collar. I found a clip at the dollar store for the pocket.

I rummaged through mounds of filthy toys at many thrift stores before I found the small walkie talkie that I used as a detonator. The black socks and shoes I already had. I was fortunate enough to find the light green hairspray
color instead of the neon green that most stores had. I found a low cut white t-shirt in the women’s section and stretchy white shorts to wear underneath to keep decent.

In Photoshop I created the Harvey Dent name sticker then printed it on a address label.

I rode the train to work as I do everyday. Except this time I was wearing a dress and when I entered the doors I held out my arms in the air and said “Good morning ladies and gentle…men,” in my best Joker voice, then I sat down. When I got to work I had forgotten my key card. So I
hunched over and looked into the windows for someone to let me in. I guess it was kind of creepy from people’s reactions. I freaked out a lot of people that day.

Here is a video: 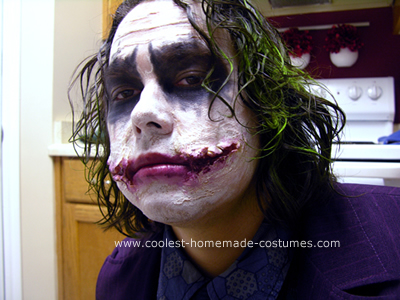 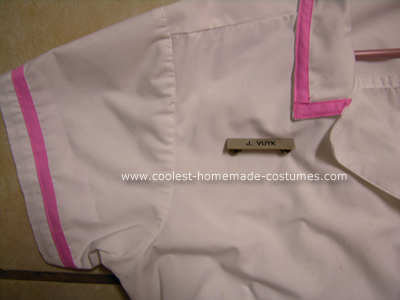 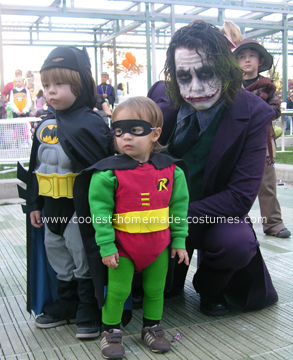