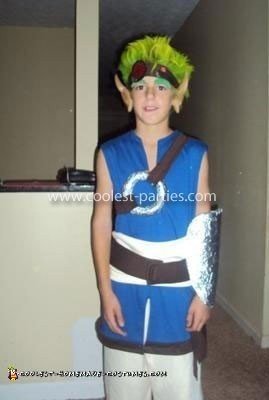 My son was Jak (should have been Percy Jackson, but he changed his mind two days before) for Halloween last year. This Homemade Jak Costume from Jak and Daxter was a very, very simple costume to make.

The shorts are from a pajama pattern and made from an ivory knit. The v-neck vest was made from a basic v-neck pattern just cut long like Jak wears and had a piece of brown knit that accented the bottom.

I just took an ivory piece of knit and made a tube for the “cummerbund” piece around his waist.
The belt was made using headliner material covered in knit and Velcrod to be a perfect fit. The head piece was the same brown knit, with pieces of fabric glued on to look like the buttons and lights that Jak wears in the game.
The arm shield was a piece of heavy interfacing covered in aluminum foil, and the circle on the chest was a plastic bobbin holder covered in aluminum foil and sashed around with another piece of brown knit.

His socks were simple tubes made to fit his legs from brown knit, but I added another little tube to the top and stuffed with batting to make it have a bit of a bump on it (see pic). His hair was a hot mess of hairspray, yellow hair color and green for the “Jak” effect. We also spray painted “Old Man” eyebrows green. 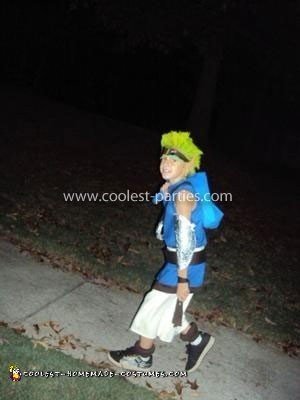 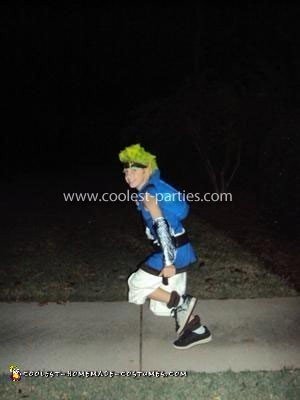 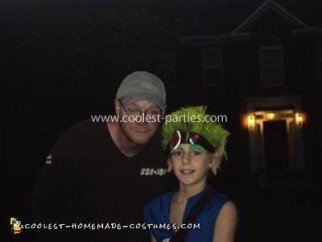