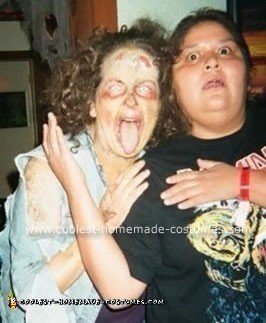 I really wanted to do a zombie, but I don’t like the look of fake blood after it dries so I decided not to be a bloody zombie, guess I’m a hungry zombie? I decided my Hungry Zombie Costume had just risen, so I took regular clothes, cut them up and smeared them with red and brown makeup-the cheap kind in the little kits you get at grocery stores, so it only cost around $5.

Then I used liquid latex to create crumbly skin and cuts/wounds to my face and arms, it makes excellent wounds, but you have to reapply the latex in layers to build up the skin texture. Then I used the same cheap makeup to color in bruises, dirt, etc. The whole costume cost $40 except for the white contact lenses which I bought for $100 but I have reused them so the money was worth it!

I won second place in a costume contest and had a great time (I also made the Mae West costume I’m standing next to, out of a cocktail dress and a thrift store hat).