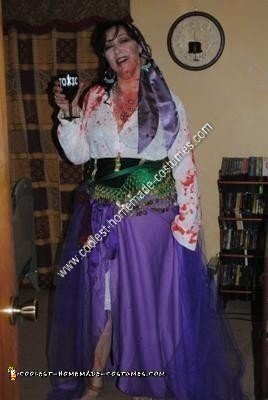 For the costume, I purchased the white top for 2 dollars and purple tab top curtains for 5 dollars from a thrift store. I stitched the curtains together, then tied it around my waist with purple ribbon and then ripped/shredded the hem. I added some purple tulle that I had hanging around to make it look more ratty. Then I found a green velvet skirt that I’d been meaning to donate, cut it off at about hip length and used wired gold ribbon that I had folded and stitched into thirds to sew to the skirt to transform it into a waist cincher. I layered the skirt over a white peasant skirt that I’d previously destroyed and topped it off with my belly dancer coin belt, a bag of gold coins and loads of sparkly jewelry.

OH and lets not forget lots of fake blood. The costume I originally wanted would have cost over 100.00 and I would not have wanted to smear it with blood. I’d say I came out on the winning end at paying only 7.00 for the whole thing.