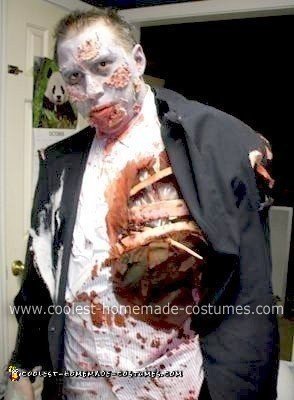 My kids and I, along with some of their friends, are planning to make our own zombie movie, so I decided to use Halloween as a chance to zombify myself as practice. The first part of the Homemade Zombie Dad Costume that I actually created was the suit jacket. I completely tore the left sleeve off because I was going to be a one-armed zombie.

To make all of the tears and gashes, I used a combination of things: razor knife, pointed trowel, 3-4 nails connected together (from a nail gun), saw, etc. I stabbed and clawed at the jacket in the way someone would if they were attacking me. Once some of the initial tears were created, I ripped them further by hand, so nothing looked clean-cut.

The shirt came next. I again tore the left sleeve off. Then I made exit and entry holes for the cow ribs that I used to make my exposed ribcage. I inserted the ribs through the holes, and duct-taped them to the inside of the shirt. Then I tore our most of the shirt behind the ribs, and taped a Ziploc bag full of pinkish-grey goo behind the ribs to look like an exposed lung.

RIB PREP: The cow ribs came from a buddy in a meat-packing plant a couple of years ago for something else. They had been outside the whole time, so any residual “meat” had long since been stripped off. To prepare them for use in this, I lit a fire in out outside fire pit and put the ribs on a grate over it – but outside the flames. This caused any marrow and moisture to leak out. I then gave them a quick sanding with fine-grit sandpaper to restore a whiter color and to remove an marrow residue. Then I applied a heavy coat of shellac to each one to seal them. While the shellac was wet I shot some red spray paint on them to give a blood-splatter effect, but not too much, and not too fine of a mist.

The rotting flesh on the face was created by pouting out some random shapes of liquid latex onto a cutting board covered with wax paper. As they began to set, I embedded bread crumbs and cornflakes into them. Once that dried, I covered them with another layer of liquid latex and let them cure overnight. (I found tips on how to do this by Googling.)

I then coated the torn out left side of the shirt and jacket, and the rib area of the shirt with a couple ounces of food-coloring (red mixed with some green to get the right blood color).

NOTE: Don’t do this the night before you’re going to wear the outfit! I had to put towels on the seat of the car to protect it from the still-wet food coloring. I couldn’t put the shirt in the dryer – even on a sweater rack – because of the duct tape and Ziploc bag that were already attached and would have melted. Using a hair-dryer helped, but I didn’t have enough time to thoroughly dry the food coloring.

The next morning I prepped my face and neck with non-pore-clogging moisturizing lotion thirty minutes before I began applying liquid latex. (This helps with removal of make-up, latex, and spirit gum, and it helps keep your face from breaking out.) I then applied the base coat of liquid latex, stuck the flesh pieces I’d made the previous night to it. (Some pieces later needed to have spirit gum applied to keep them stuck to my face – in places like my cheeks that moved a lot.) After that layer began to setup, I applied more in some areas, peeled some pieces partly loose, etc.

Then came a base coat of white cream makeup. Then full makeup and blood. I slipped on an old junky white t-shirt, then the “rib shirt” and the jacket. A pair of slightly shredded suit pants, and old junky black shoes rounded off the outfit. Being a stickler for detail, I applied makeup completely around my neck, on my ears, and any other skin – arms, hand, leg that was exposed completely or through a tear in the clothing.

I pinned the left part of the jacket to a couple places on the shirt to keep in place, which kept my left arm was hidden between them, and kept my left-hand in my pants pocket. The end of one of the ribs stuck out through the torn sleeve, finishing the torn-off arm look. There was enough slack that I could bring my hand and forearm out to use at work, etc.

Everywhere I went that day – doctor’s office, work, stores, etc. – I stayed in character and shambled along with a blank, slack-jawed expression. The reactions where awesome; most people were very impressed, some scared, some just creeped-out, and many confused as to how I was missing an arm, because there was no tell-tale bulge where my left arm was hidden. 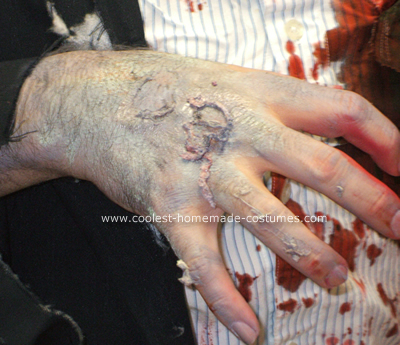 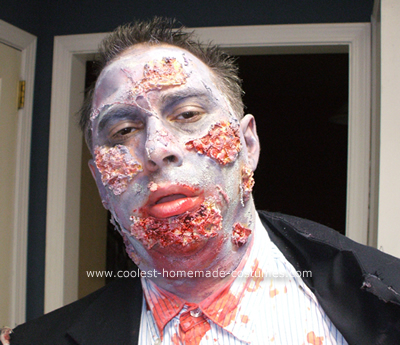