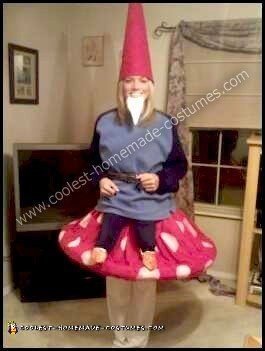 I saw a young girl about six years old dressed up as this last year. I wanted to run with the idea this year because I think it is so funny and love to be extremely random. Last year I went as a bathtub, or rather a person in a bathtub!

I made every inch of this Yard Gnome on a Toadstool costume myself.

I first took two pool noodles and glued them together. I then bought red fabric, sponge- painted white circles on it with a car sponge and then hot-glued the fabric around the noodles. I cut a beard out of fake fur and glued it to my face. I rolled up poster board and glued felt around the cone-shaped hat.

I bought a pair of kids’ pants from Goodwill, stuffed them with newspaper and taped elf-like slip-ons to the bottom of the pants. I wore white pajama pants, a blue sweatshirt, and put a belt on.

The whole night I was excessively using the word gnome. For example, I was saying: “Oh wow I didnt gnome that” or “I gnome right”. I told everyone I was reading “Better Gnomes and Gardens”. At the end I was even getting on my own nerves! Hope you like this!

2 thoughts on “Coolest Homemade Yard Gnome on a Toadstool Costume”