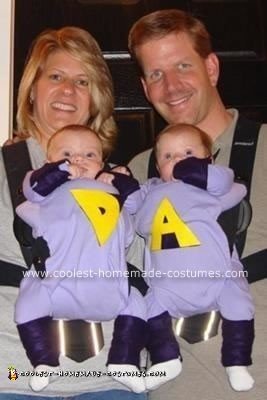 My twins were only 4 months old for their first Halloween. If they had been our first children I would have kept them at home passing out candy, but we have an older son who wanted to Trick-or-Treat. I knew that we would have to carry the twins in our front carriers, which would cover any costume we put them in, so I came up with a way to incorporate the carriers into their costume. Since the carriers are heavily padded they have a muscle-bound “super-hero” look to them. What else could I have come up with but the Wonder Twins?

For the homemade Wonder Twins costume I purchased long-sleeved light purple bodysuits and leggings for both babies, plus one additional short sleeved bodysuit in a bigger size to cover both carriers.

I bought dark purple and gold felt to make the wrist bands, boots, collars, and chest insignias. Instead of using a “Z” and a “J” on the insignias for Zan and Jayna, I used an “A” and a “D” for the first initials of my twins. I used a fusible webbing to put the gold and dark purple felt together and also to attach the collars to the bodysuits. Velcro was used to fasten the wrist bands and boots around their wrists and ankles.

Finally I cut the extra bodysuit in half and safety pinned each half to the front of a carrier and attached the insignia.