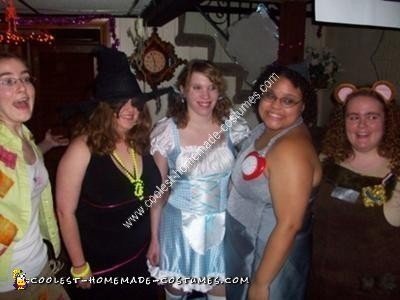 My friends and I love the Wizard of Oz and we wanted to dress as a group last year so we all went as different Wiz characters!

Everyone except for Dorothy got their costume at Goodwill and modified it or used pieces of their own wardrobe, I’ll elaborate a little…

Scarecrow – Neon Green Blouse and Tan skirt purchased at Goodwill. We bought plaid material and little bows made of hay and randomly hot glued them around her outfit to give it a scarecrow effect. She wore purple converse and knee high argyle socks to tie it all together.

Tin (Wo)Man – Silver prom dress purchased at Goodwill, bottom half cropped and hemmed to new length. I bought a red oil funnel and spray painted it silver for the hat. Can’t be seen but I also bought a pair of brown riding boots from Goodwill and spray painted them silver too.

Cowardly Lion – Long brown jumper purchased from Goodwill, bottom half cropped and hemmed to new length. We purchased fake fur from the craft section at Walmart and lined the bottom, top, and pocket hems. Brown shirt worn underneath and brown “mouse” ears and tail were added. Brown tennis shoes tied the outfit together.

The Lion and Myself (Tin (Wo)Man) also bought our pendants (The heart and Certificate of Courage) from Johnny Brocks. Probably over priced but they were cute. 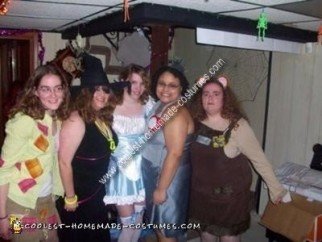 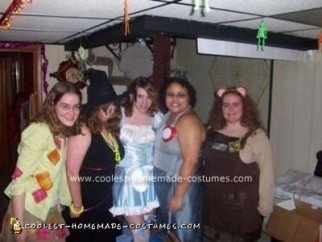