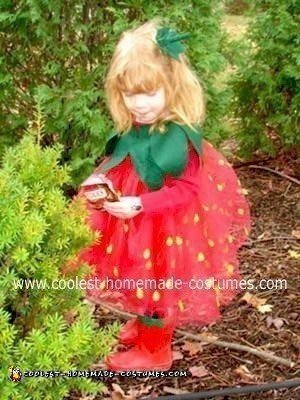 My daughter’s boots were the inspiration for this homemade Wild Strawberry Halloween costume.

I then discovered that there were no Strawberry costumes for sale and I would need to do it myself. I began with a red velvet dress bought on EBAY. I sewed two layers of red tulle around the entire dress so it went around and under the armpit. Before attaching the tulle to the dress it was shirred, meaning a row of stitching that is pulled to bunch up the fabric.

Yellow felt seeds (teardrop shape) were cut out and glued on using fabric glue. The collar was attached to green felt leaves, slightly overlapping, which were sewn onto the collar by one row of hand-stitching. You don’t want to glue the whole thing down or the child will not be able to move well. The leaves should be cut long enough so they meet the red tulle and cover at least part of the sleeves.

The stem on her head was a 2″ tall piece of felt rolled and then sewn to a set of smaller leaves. The headpiece leaves were fanned out to make a circle with the stem in the middle. Once the stem and leaves were sewn together, I attached them to a barrette my daughter already had. She wore black leggings to stay warm and a red long-sleeve shirt under the dress. The boots were the final touch and came in handy since it rained this Halloween. She was a HIT!!