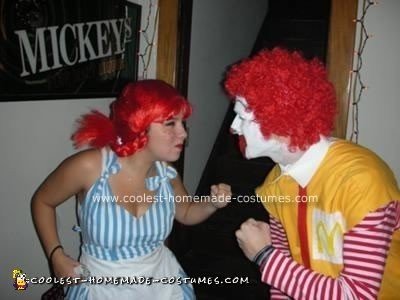 These Homemade Wendy and Ronald McDonald Costumes really played to my infatuation with fast food. All in all, it took a bit of digging and the help of my girlfriend’s sewing ability to create these fun costumes. We got plenty of laughs, plus we raised awareness of Ronald and Wendy’s secret tryst.

Since we could not find anything really resembling Ronald’s jumpsuit in the right color, my girlfriend had to make it. I picked up some nice heavy fabric in the electric yellow and we tried a clown suit pattern. In retrospect, I would recommend something more of a jumpsuit because the clown pattern turned out to be quite enormous in all the wrong places. Also grab some red zippers for accent and white fabric to assemble the arches emblem (just cut it out and glue it on).

Wendy was easier for my girlfriend. She decided to sew up the dress instead of buying something. The trick was finding the right pattern of fabric, which was not as easy as you might think. The intricacies of the dress’ creation are a mystery to me, but it turned out great! Throw in a Pippy-Longstocking wig with a hanger pushed inside and you’re all set!

I think the highlight of our night was early on when we decided to tour our respective fast food joints in the area. Unfortunately no free burgers ensued, what gives?!