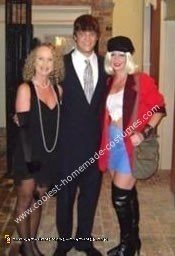 I had more fun being Pretty Woman than I ever have during Halloween! We were in New Orleans for Halloween. I even got engaged in my costume that night! (My boyfriend was Edward (Richard Gere’s character).

For the dress, I dyed the fabric for the skirt and had side seams, and darts around the top sewn. I hemmed the bottom and top of the skirt with fabric glue, spray painted the rings in front and back, sewed them in, cut off a tank top and hemmed it with fabric glue. For the jacket, I bought a red wool blazer and used a black fabric pen to color in the cuffs, collar, and pockets.

I bought the bracelets on the internet. The boot covers on the internet. I bought second hand boots that were comfortable to walk in to go under the boot covers. I had black leather string around my neck with a housekey attached. I got the jacket, boots, and purse at a second hand store. Bought the wig and had my Mom trim it short for me and bought the hat at the store I got the wig at.

No one else was dressed up like me and everyone knew who I was. I was shocked at how many men knew who I was supposed to be. People were stopping me to take pictures and I heard people saying “Pretty Woman!” everywhere I went. I will probably dress up the same next year. It was great!