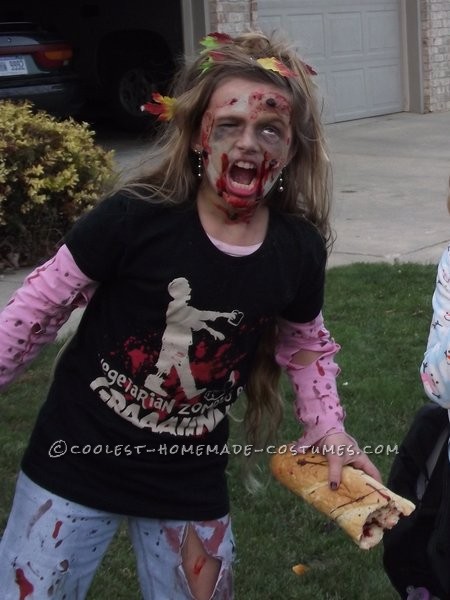 Inspiration comes in many forms, but for this costume, it came from a t-shirt. My daughter saw the t-shirt at a local store and decided to be a “vegetarian zombie” for Halloween.  The t-shirt reads “Vegetarian zombies  eat graaaiinnnss.”

In making this costume, a person could take a plain t-shirt and write the simple phrase” “Vegetarian Zombie” on the front. From there, we took some old blue jeans and ripped and bloodied them with fake blood (brown eye shadow works to create some of the dried blood and gore). We did this for the shirt underneath as well as the shoes she’s wearing (save your old pairs for future zombie use!).

We tousled and teased her hair, then added some fake leaves and other debris (after all, zombies usually emerge from the ground). We then added zombie make-up, fake skin, and blood. She is carrying a loaf of bread and a cob of corn, all appropriately torn and bloodied (this is where artistic license comes in with the blood on the grains and vegetables). She practiced her zombie shuffle, and voila, vegetarian zombie in the undead flesh!