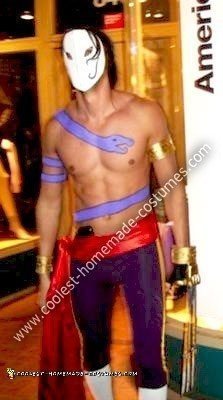 I spent a good amount of time last year on my costume to reconstruct one of the Greek Hoplite soldiers from Troy, though the costume looking nothing like someone from 300, almost everyone thought it was. The costume came out awesome, but was somewhat of a failure I guess.

Anyhow, I wanted to do something different this year, so during the summer I came up with my Homemade Vega from Street Fighter Costume idea. So I started piecing together how I could do it. Once I came up with a solid materials list, I began acquiring them.

I wanted everything to look authentic, so I decided right off that I’d make it all by hand. Besides, you can’t buy any of this stuff anywhere. So everything you see on me was made from various materials I picked up over the past few months. I’ve gone and done a writeup of the build process of my costume. However, I put a lot of my own time and efforts into this costume and used absolutely no references of any kind. I created everything on my own. The claw and mask were particularly difficult to make.

I’m not prepared to give away all the ideas I came up with and materials I used if I “might” win a costume contest. If I don’t win, then you guys now have all my costume secrets and I have nothing. Doesn’t sound like a fair wager on my part.

So, here’s a pic of my Homemade Vega from Street Fighter Costume. It was taken on Oct 31, 2009 in downtown San Diego. If you were there, you probably saw me walking around at some point.