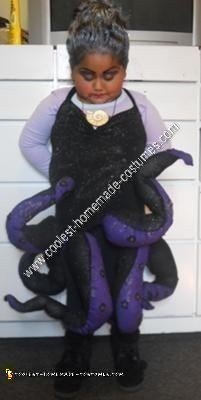 This great homemade Ursula Halloween costume idea started when I couldn’t find a costume I liked for my daughter. So I thought about Ursula the sea witch, after all it’s one of the costumes u never see on a child. And this was my first homemade costume.

So all I did is buy all back and purple fabric, and used light purple long sleeve shirt to mimic Ursula’s skin.

Step # 1: I made a strapless-like looking top for the top part of the dress.

Step # 2: I made 7 black triangles and 7 purple triangles a lil’ wider than the black ones for the tentacles. Sewed them, stuffed them with poly-fill and before closing them up I straightened some wire hangers, cut them to the right length as each tentacle and on the ends put a lot of black cable tape so it wouldn’t tear the fabric or harm my baby girl. And finally sewed the top of them individually.

Step # 3: I finally sewed on each tentacle where I wanted it located. After they were all sowed on I sewed on three separate tentacles (like every other one on to the top part of the dress so they wouldn’t all be hanging. So it would give it the effect like Ursula’s own tentacles). Hers would always look like they had a mind of their own be up n down…. After everything was sewed on, I bought a spray can of fabric glitter and put some all over it to give it a lil’ glamorous look.

The necklace: made it out of a piece of white cardboard and a gold marker. Basically copied Ursula’s shell necklace of a picture and added a black string to it. And voila all done…

For her make up I used blue eye shadow and a black eyeliner to do her dramatic eyebrows and her famous birthmark under her lips and red luscious lipstick. 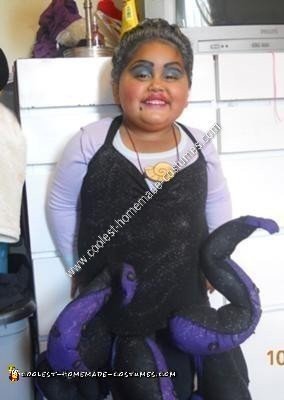