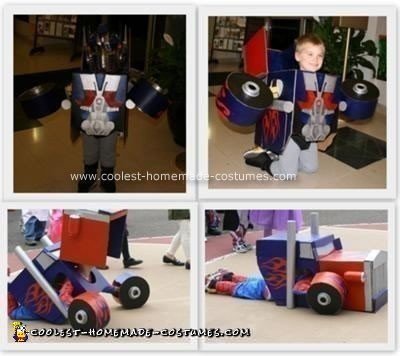 Lil Eric loves his transformers, especially Optimis Prime. I decided to make his Homemade Transforming Optimis Prime Costume out of cardboard. It’s everywhere and people want to get rid of it. I actually took sheets of flat cardboard and cut it to make the box shape that I wanted.

There was a lot of planning involved before the cutting started. I recycled soda cans, toilet paper rolls and cardboard tubes, just to name a few. I was given plastic circles that were once inside giant tubes and used them to make the wheels for my son to hold. The thin cardboard from cases of beer were perfect for bending to a round shape. I put a backpack inside the cab to help with the weight. I also painted the body of the transformer onto the chest of the costume.

I used my son’s toy transformer for the inspiration and we used his Optimis Prime helmet because it talked like the real thing! I had such a good time gluing and painting and adding on to the costume. My son gets it out to show his friends and loves to show how he can transform.