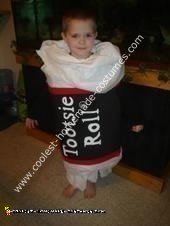 I was trying to come up with an ideal costume for my son for Halloween, and he was sitting there at the table eating tootsie rolls, which he loves, and he says I want to be candy for Halloween.

So I looked online for a Tootsie Roll costume and they have the ones you can buy… I thought they were pricey and I thought I could do it better.

I used cheap black spray paint and painted the box, then I took the black fabric and hot-glued it around the cardboard. I then hot-glued the white fabric around the top and bottom of the candy. I also used a little bit of elastic to bunch up the fabric around his neck and legs so that it looked like a candy wrapper. I used the craft paint and painted on the Tootsie Roll letters.

All together about $10 spent on the Tootsie Roll costume, and a couple days to make. It was really easy and fun. He loved it and he won two costume contests! Everyone thought he was so cute.