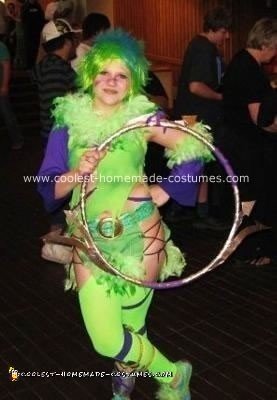 Video Games Live is an orchestra concert that comes through town every year that features video game music. As part of the event they hold a costume contest as many people love to “Cos Play” as video game characters. I had never done it before but I love making costumes and dressing up so I jumped at the opportunity. I decided to dress up as one of my favorite female characters from the video game “Homemade Tira from Soulcalibur Costume”. Tira has many different costumes, so only having one day to make the costume I took a few internet print off’s and hit the local thrift store’s and party/Halloween supply shop.

I had to take a few liberties with the look because of time constraints but I was still thrilled with the final result.

From the Party store I picked up the neon green tights and wig, some blue hair spray, the green lipstick and 2 feather boa’s. And from the thrift store’s The bright green dress(top), a pair of green shorts, awesome blue and green runners, a white belt and a purple piece of fabric. I looked everywhere for purple gloves with no luck, so I had to make due. My last stop was a dollar store where I picked up gold trim, green and gold paint and silver ducked tape.

With only hours to go before the concert I pulled an all nighter putting the costume together. I started by fairly randomly slashing up the top (I did not want it to be as “sexy” as the cartoon). Next I cut up and sewed on the feather boa around the neck. For the shorts I cut a piece out of each side and hammered in rivets so I could lace them up, for this I used an old black shoe lace.

I sewed the rest of the boa’s to the bottom edge of the shorts. I also cut the green tights so to have skin visible through the lacing. I painted the white belt green with a gold buckle(this took a few coats).

I took some thin cardboard and cut it into the shapes for the leg armor (4 pieces for each side)and covered each piece with silver ducked tape. I hot glued trim around the edges and cut out shapes from the purple fabric to glue on as well, and then I glued the leg armor pieces right to the green tights. But I also put pieces of trim around my leg to look as though they were strapped on to my leg.

I sprayed the wig with blue hair spray as I could not find a blue wig and also gave the whole costume a spray with a darker green spray paint to add dimension. The selves were the last addition, and were very simply the purple fabric I had been using, attached at the shoulder on one side and attached to feathers and worn from the elbow down on the other, mostly just for interest.

Because she is from a fighting game the hoop weapon was important to the costume, so for that I used a small hula hoop I had around the house and covered it in silver ducked tape. I did not want it to be dangerous so I used a very light cardboard for the blades covered them and attached them with silver ducked tape as well. I tied a few pieces of the purple fabric around it to look like hand grips but also for decoration.

The finishing touches were the make-up with the purple slash across the face, green lipstick,green eyeshadow and false eyelashes. The shoes I picked up at the thrift store were perfect on their own but I tucked the last little piece of feathers in there for fun.

It was a ton of fun both making and wearing this costume, and I had a so many people taking my picture! Total cost was around $75 including spray paints and the wig (which are expensive). 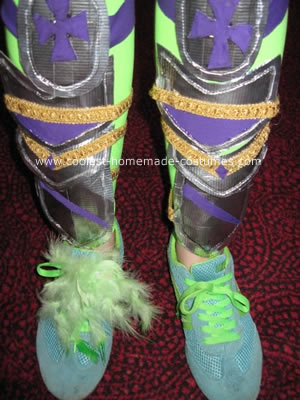