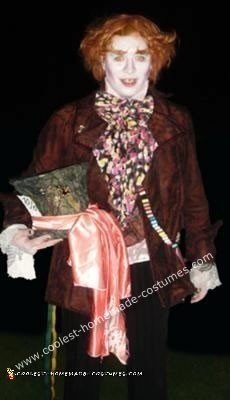 My girlfriend and I saw the movie trailer for the new Tim Burton Alice in Wonderland movie. We saw Johnny Depp as the Mad Hatter in the movie and decided we had to dress up as the new Alice and Mad Hatter from the movie for Halloween. This Homemade Tim Burton’s Mad Hatter Costume took many trips and hours to the fabric and craft store to re-create. I’m pretty sure we spent at least 3-4 hours in the fabric store and at least 2 hours in the craft store. It took a lot of time but we love the costume and have gotten many compliments around where we live ( Hollywood). I hope everyone likes it as much as we do as it took a lot of time and a lot financially. We had a great Halloween!

The hat is made from a part of an old hat and we added a lamp shade to the top of the hat to make the correct shape. We then duct tape the entire thing and super glued it in order for it to stay. We then wrapped fabric around the entire hat. Next, we spray painted the had for texture and again wrapped the entire hat in a mesh fabric. We added the large stitching needles and saudered the ornaments to the long gold needled. We also added a peacock feather and 10/6 sign on the hat. After that we used left over pink fabric for a scarf around the hat. We hand painted white daises on the scarf to replicate the movie.

For the bow tie we used an old Christmas bow and hot glued the fabric we wanted onto the old bow and then hand painted the bow to get the colors exactly right like the trailer.

The jacket was from Goodwill and we sewed on all new buttons and sewed on rough yarn for trim around the entire coat. We also added ribbons to the pockets as well as scarves.

For the plaid hand wrap, we used an old sock and cut out the foot part and sewed on plaid fabric to the sock.

It was a worth the work!