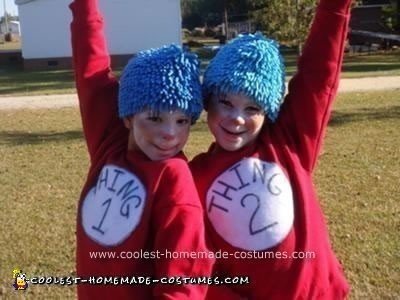 My daughter and her friend wanted to do something together so I suggested a Homemade Thing 1 and Thing 2 Halloween Costumes from the movie, “The Cat in the Hat.” It was a great idea. The headpiece was made out of a carwash mat. I cut the backs in half,then sewed them together to fit the head. Painted their faces and put tissue under their top lips to make them poke out.

I took a white self-adhesive felt sheet and cut it in a circle, drew Thing 1 and Thing 2 with a black marker. I took red bedroom shoes and glued red feathers on them and sowed them to the end of the pants legs. This character was great for these two because their character personalities are really similar to their own personalities.

When we went trick-or-treating, they got many positive responses on their costumes. This is a really good costume for friends and siblings of all ages.