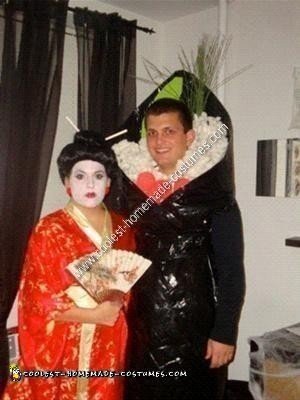 This year for Halloween I decided on a homemade Sushi Roll Halloween costume idea. First I took a sheet and cut it so it would wrap around my body. I also cut holes in the sheet so that I could put my arms through them. I then used a black duct tape to cover the entire sheet. To keep the portion of the sushi roll behind my head upright I duct taped a thin piece of wood into the costume.

For the rice I took white packing peanuts and spray glued them so they would stick together. I took styrofoam balls and painted them an orange/red for the roe (fish egg) and I also took a styrofoam block and cut it/painted it green to look like avocado.

Once I wrapped myself in the duct taped sheet, I added in the rice, fish egg and avocado and had a friend spray glue the items inside so they would stay in place. I also used another piece of duct tape around me to hold the costume on. My girlfriend dressed as a geisha to complete the homemade Sushi Roll Halloween costume idea.