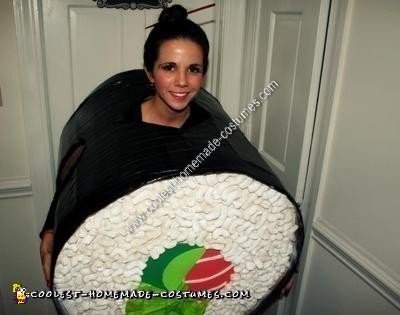 My costume is a giant sushi roll! I had never tried sushi until I started college and it’s been an ongoing love affair ever since. I really wanted to be some type of food for Halloween. I love when people dress up as food on the side of the road or in commercials. I think it’s adorable and hilarious at the same time! My homemade sushi roll Halloween costume idea is a salmon roll with seaweed (tissue paper), salmon, and avocado (foam).

The entire process took around 6 hours to make but I broke it down over the course of a week. The roll itself is made of a cardboard box which I folded and rounded out, then enforced the circle with more cardboard which was fitted into each end. The outside of the roll is black duct tape. The rice are glued and spray painted packing peanuts. I kept up with the theme by wearing my hair in a bun and putting chopsticks through the bun.

This was by far my favorite costume ever and I am beyond proud of it. So much fun and worth every hour! You are what you eat I suppose.