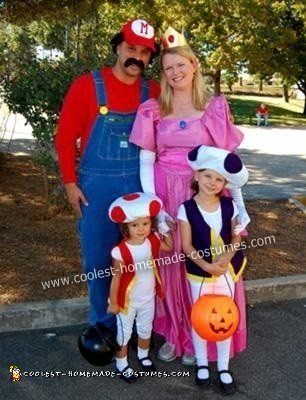 Our 5-year old daughter loves Super Mario, so we decided to go as a group.

I made the Toad hats by sewing 2 round pieces of fleece together, then cutting a hole in the bottom for the head. I used a piece of craft mesh (it’s kind of like a screen door but stiffer) stuffed inside the hats to make them keep their shape yet still be light and easy to wear. I glued the felt circles on with craft glue. The vests are sewn from felt since it doesn’t fray or have to be hemmed, and I sewed a yellow ribbon on for the trim.

I found the Princess Peach dress at Goodwill for $5 and added the embellishments. I sewed on a wide pink stripe for the hem and sewed 2 ovals for the panniers – they’re just safety-pinned on! Then I made a sash. For the “jewels” on Peach’s dress and crown I had a hard time finding anything the correct size, so I used river rocks and painted them with nail polish! The crown is made from gold cardstock (I used 2 layers so it would be sturdy) and I hot-glued hair combs to the underside so it would stay on my head.

Mario already had his overalls, so we just painted plain wooden buttons yellow and tied them on with dental floss. The hat is a plain red hat that we painted a white circle on, then glued a pre-made “M” to.

Our homemade Super Mario group Halloween costumes were a huge hit everywhere we went – people stopped us to ask if they could take pictures!