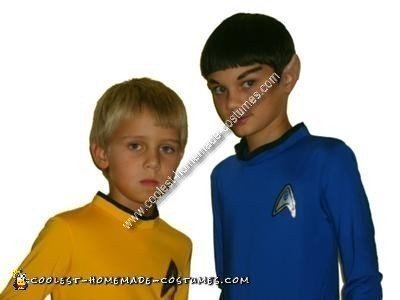 These Spock and Kirk Star Trek Couple Costumes were a big hit, everybody loved them, and the best part was that they were simple! The shirts were Champion DuoDry long-sleeved athletic shirts that I added 1 ½ in. black elastic to the neck to create the higher collar. I used fabric glue to attach the elastic. I also used fabric glue to attach silver ribbon stripes around the sleeves. I printed the Star Trek insignia (that I found on-line) on iron-on transfer paper then used metallic silver paint and black Sharpie on it after it was ironed on to make it more visible and so that it would stand out.

Of course Spock would not be complete without “the ears”, so I purchased elf ear tips online from a costume company. The ears were put on with special glue (available at Halloween stores) and I used make-up to shade them and blend them in to his skin. I used liquid pen eyeliner to draw in Spock’s eyebrows and black mascara on his hair (everyone was surprised that it was his real hair- just had to comb it forward, trimmed the front a bit and trimmed his sideburns at an angle, once the water-proof black mascara was in, his hair didn’t budge!) 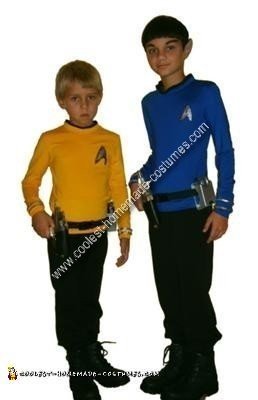