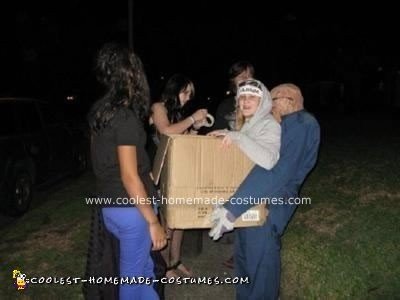 My daughter and I made this Special Delivery Optical Illusion costume out of duct tape, cardboard, and wire hangers.

The mask is an old Freddy Kruger mask we had lying around, and the jumpsuit I bought at a thrift store for $5. She fitted through a hole in the box, and her legs were in the pant legs of the blue costume suit. I cut down the front of each leg and attached Velcro to reclose them around her legs, making it easier to put on.

I cut and shaped hangers in an arch shape and separated them with strips of cardboard held together with duct tape. I attached them to the box for shoulder straps. The jumpsuit fits over these to make the shoulders.

The rubber mask on the dummy has a balloon inside to hold it up. At first I tried to stuff the whole dummy with paper and bubble wrap, but it was too heavy. The whole thing is held together with 2 rolls of duct tape, but it is all very well hidden inside the costume. She didn’t need to carry anything to put candy in, they just threw it in the box!

She was the center of attention all night. People were either taking pictures of her, or wanting to be photographed with her. She said she felt like she was famous for a few hours. Including the duct tape, the whole thing was about $15 and took 4 days to complete. It is an amazing illusion, and really looks like she is being carried in a box. People even thought there was someone in the costume carrying her!