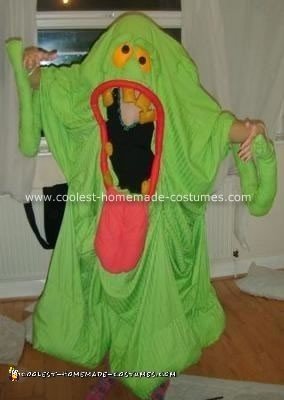 Ugghh! Where are all the cool original costumes?! The only option was to make my own, just what….

Well after a week of a lack of ideas via facebook status updates asking for help, I decided to go down the horror movie route. Ghostbusters, an 80’s classic, you really can’t go wrong but then again, it was entirely likely I’d run into a lot of Ghostbusters on Halloween in London, in fact I met 15 that night!

So it was decided, I would be Slimer, after all how often do you see a big green slimy ghost on Halloween? (well probably more than any other night of the year but still, I bet much fewer sighting of Slimer than of all those girls dressed as bloody vampires).

To the drawing board…

2 weeks later, many pricked fingers, a trail of threads and fabric shreds on the carpet and I’m done!

Luckily most people recognized who I was suppose to be and various teams of Ghostbusters (including several random tourists) asked to have their pictures taken with me. One girl did ask if I was a Caterpilla, clearly she belonged to team Edward and hadn’t been educated in the classics.

High light of the night? Swinging on the London underground handle bars as the doors opened to unsuspecting civilians!