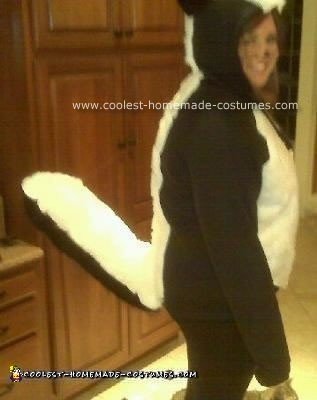 I got word of a last minute costume party and tried to think of something really cute and clever I could throw together within a few hours. I refuse buying costumes and didn’t want to be something revealing/sexy like most other college girls. I wanted to be warm and comfortable in my costume.

All it took was a trip to Wal-mart, some digging around in my closet, some scissors, a glue gun, fur, batting, and a needle and fishing line.

First I bought a black hoodie, white fur (for the stripe down the back and stomach) black fur (for the ears and underneath the tail).

I used a pizza pan to cut out a circle of white fur for the stomach and cut a wide strip the length of the hood and the back. Hot glue into place.

I free handed the shape of a tail and cut one piece of black and once piece of white fur. Hot glued the edges (leave the bottom open where it connects to the hoodie) and stuffed it with batting. Hot glue it shut (basically I just made a pillow!) and hot glued it onto the bottom back of the hoodie.

Use fishing line and a needle to raise up the tail where you want it and sew the tail to the neck/hood. Do this a few times so it stays secured while you’re wearing it.

When the hoodie was done I just paired it with black leggings, a black t-shirt underneath, and black ugg boots. Finish using a little black eye liner for whiskers/nose and WAH-LAH! An adorable, warm, comfortable skunk costume!

I got SOOO many compliments on it, people were petting me, and people thought it was really creative. If I would have had more time I wanted to some how rig an aerosol air freshener as a “sprayer” underneath the tail but never got that far… I think it would have been hilarious though! 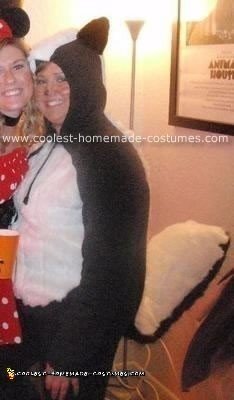