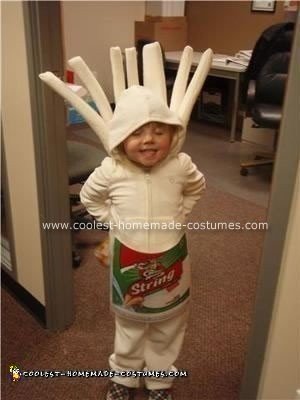 Our daughter is only 4, so one would think she would want to be a princess or Hannah Montana for Halloween, but no… she always wants to be something unique. Last year she was broccoli! An idea she came up with on her own when she was 2, we thought for sure by time Halloween came around when she was 3 she would have changed her mind… nope.

Then the day after Halloween last year she said, “Next year (2009) I want to be cheese!” And so the idea for the Homemade Silly String Cheese Costume came about! Her father is the creative costume designer. The string cheese costume is quite simple, but oh so adorable! He started with a plain sweat suit from Old Navy, used polar fleece to make the “strings of cheese”… basically made a huge glove, stuffed it with foam and then attached it to the back of the hoodie with white yarn.

He made a photo copy of the “Frigo” string cheese label from a Costco size package, laminated it and tied it with yarn around her.