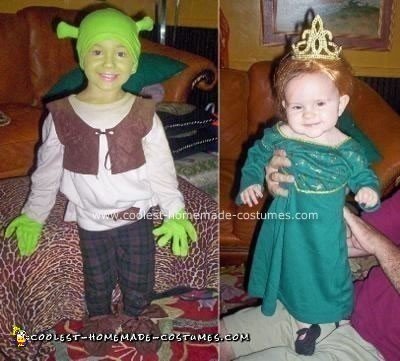 I just cam across your site and I love it! I have been making our Halloween costumes for years now and thought I’d share a few of them.

First up is my Homemade Shrek and Fiona Costumes. When my son was 3 years old I decided to dress him as Shrek and my 8 month old daughter as Fiona.

I found some green cloth at a thrift store (most of my items came from thrift stores or yard sales – a few items were purchased from Wal-Mart and other stores and modified to work with the costume) to make Shrek’s hat and gloves. I just used trial and error to get the hat size right and to get the shape of the ears right.

I stuffed the ears with poly-fill to make them stand up. The cloth for his vest and belt was also found at a thrift store. It had a feel of thin fake suede. I made a paper pattern and cut out the sides and back separately and sewed them together at the sides and shoulders. I snipped a small hole on each side and tied with a brown shoestring.

The belt was just a strip of that cloth safety-pinned at his waist. I took this same cloth and cut out large circles. I took a pair of his old sneakers and hot-glued the sole of each in the middle of each circle. Next I put hot glue around the edge of each shoe and gathered the cloth around it. I used shoe strings to tie the remaining fabric around my son’s ankles to create Shrek’s shoes.

His shirt is a long sleeve white t-shirt that was too big for him (also purchased at a thrift store). I tea-dyed it to get the color I wanted. I found a pair of blue plaid flannel pajama pants at Wal-Mart and used brown Rit dye to dye them the dark brown color. I used green Halloween make-up from Wal-Mart to color his face green.

Fiona’s costume started as a ladies green turtleneck that I found at a thrift store. I used one of my daughter’s dresses as a guide to make a paper pattern to get the shape/size for Fiona’s dress. I cut the pattern pieces out from the green turtleneck and sewed them together. This again had some trial and error. Especially attaching the arms to the dress body.

I used gold glitter fabric paint to make the design on the bodice and a piece of gold decorative edging to go at her waist. Her shoes were a pair of cloth slippers that we already had for her. However, they were pink, so I dyed them black using Rit dye once again. I bought the wig at Wal-Mart. It was an adult wig cut in a “Bob”. I braided the back and it used a safety pin to make it small enough for her head.

Next I hot-glued the crown (purchased at the Dollar Tree) to the wig to keep it in place. Fortunately she did not mind wearing the wig and kept it on most of the evening for Trick-or-Treating!