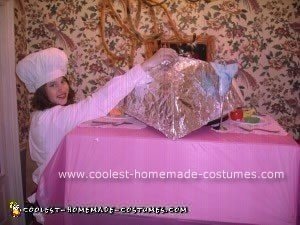 This homemade server and human platter couple costume was really fun and easy to make.

As the table we used a large card-board box, with a hole cut out of the middle for the head. We then took off the two sides, which were at each side of the hips, so the arms could be loose and comfortable. Then we added a plastic table cloth from the dollar store and started placing plastic food, cutlery and cups that were all stuck on with double sided to act as a set dinner table. We placed real lettuce around the head on a plastic platter, and painted my face as if I was dead.

The server was dressed as a cook/ waiter, including a white coat, apron, chef hat and a food cover, that was placed over the head when approached to doors.

This costume was a big hit, and was enjoyed by many! 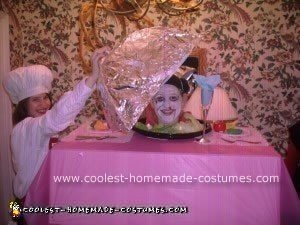