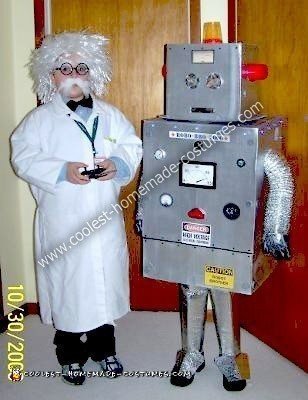 Our daughter is the Professor and our son is the robot. Mister Doctor Professor McBrain- Robotics Specialist invented a walking, talking, blinking robot named Robo Bro 2000 (incidentally it is “her” brother and he was born in 2000!).

Professor McBrain has a name tag that we created by taking “his” picture in costume and adding some “important” information. The small print on the name tag reads “Accomplished scholar and world famous major award winning inventor of the new Robo-Bro 2000 (See display model).”

The Professor?’s Grandma made the white lab coat and we purchased the wig, eyebrows and mustache through Oriental Trading. The glasses and bow tie was from a local costume shop. He had test tubes in his lab coat pocket. They were edible and from Oriental Trading. One was eyeballs, one was a finger and one was a millipede.

We went to a grocery store and got two boxes for the robot. The arms are dryer venting and he wore gray rubber coated gloves. The legs are made of a car windshield sun reflector and Velcro. His Dad found some signs and gauges online, printed them out and used rubber cement to attach them to the box, a couple of them are real gauges, attached with hot glue. One is a tire guage. One is a watch. We bought blinking necklaces from the Halloween isle at Wal-Mart and took the front cover off of the strings and attached them behind the tea strainer eyes so the eyes would blink. We also used one for a low fuel gauge to be blinking. We put screen over the mouth hole (which my son also used to see from). The nicest blinking light was a $10 bike light that had several settings to choose from.

We installed battery operated blue LED lights for around the box. We used the under the cabinet push on lights for the sides of his head with red plastic cups shortened to fit securely over. The top of the head had an orange cup over the strobe light. Needless to say he was very lit up!

The kicker definitely was the toy voice changer that we happened to have on hand that his Dad hooked up inside the costume. The head was put on with Velcro so was easily lifted off between trick-or-treating houses. For people we knew and for a costume contest they put on a little skit.

The professor introduced himself and his latest invention and then used a car remote to “control” him. Some of the things he had programmed the robot to do was jump up, lift his right arm and his left, turn around in a circle and speak his name. When people heard the robot was when they would really go crazy. He would say “R-O-B-O B-R-O 2000” and then the professor would say, “He is fueled on candy” and then the robot would say “R-O-B-O-T D-E-T-E-C-T-S C-A-N-D-Y’.

It was a very fun night of trick-or-treating and people taking their pictures along the way. One little boy asked the professor to have the robot say his name. When Robo Bro 2000 said the boy’s name the little boy said, ‘This is the best Halloween ever!” We had great fun building the Homemade Scientist and his Robot Halloween Costumes together.