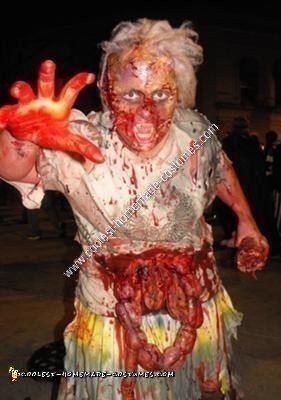 I started out this Homemade Scarry Zombie Hag Halloween Costume by taking pantyhose and filling them with stuffing, and tying them where appropriate to make the large intestines. I made a small intestines by filling two pantyhose legs with less stuffing. Both sets of intestines I covered in liquid latex, and then airbrushed for color. I took the waist/crotch part of the pantyhose and made a “belt” which I attached the intestines to, and added fake blood and fat dripping out of a wound in the stomach, made with airbrushed liquid latex.

For the head, I took a basic bald cap and built up texture with liquid latex. I airbrushed for color. The hair is made of cotton cobweb material which I stretched to make wispy and so it looked like old hair. I latexed it onto the bald cap.

The arm I was carrying around was a plain fake severed arm bought from a Halloween store, but I significantly improved upon it. It looked clean-cut off, so I added up some liquid latex to make its flesh look ripped off and dangling. I made the skin look like it was peeling/rotted away and airbrushed the whole thing to look dead and decaying. I left some latex loose so that when I walked around I could tug at it with my teeth to give the appearance of eating meat off the arm.

Finally, I tore up a skirt and shirt and rolled them in dirt and mud, and then splattered them with fake blood. When it came time to makeup, I actually ran out of time and couldn’t make all the effects that I had wanted to, but I tried my best. I used cream-based makeup and made myself look like I had just come out of a grave.

I had a lot of fun lurching around on State Street in Madison, WI. I hissed at passersby, I stalked random people, I climbed in front of windows of restaurants and spooked the patrons. People would come up to me for pictures and tell me how freaked out they were, and then I would munch on my severed arm and they’d REALLY be grossed out. Overall I had a lot of fun with this. 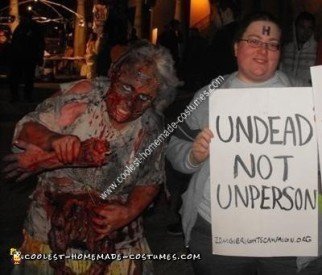 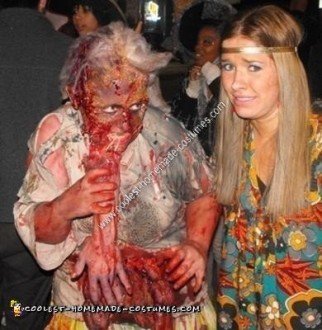 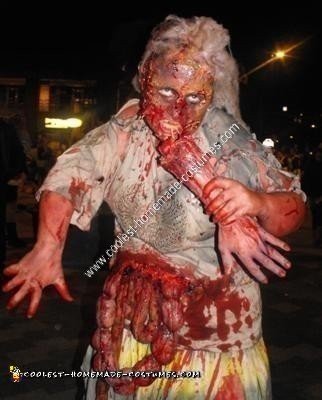