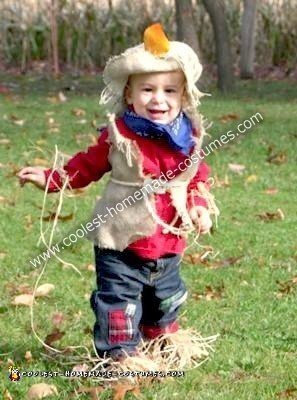 For his hat, I placed the large circle I had cut out of the burlap (see above) on his head and used a loose rubber band to hold it in place. I turned up the front and stuck leaves around it. The hat was cuter than any store-bought straw hat because it looked so rugged and natural.

Lastly, I used eye-liner to draw two lines curving up on the corner of his lips with criss- cross lines to make him look like he had a sewn on smile. The entire costume was so easy to make and it was so much fun to see him wear it. We got a lot of compliments on our birthday scarecrow!